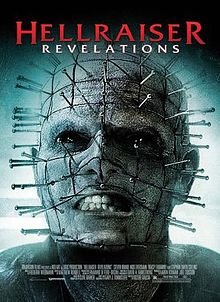 Two things that made me wary of the ninth entry into the long running "Hellraiser" series: 1) it does not have Doug Bradley as Pinhead and 2) it flew into production so fast, I'm sure no one spent any time actually considering making it a good film. These worries are completely and utterly justified as I write this and the credits of this rather atrocious film roll. Fans of the franchise should certainly be cautious and those looking to get into the "Hellraiser" films should steer clear too. In fact, its probably a good idea just to avoid "Revelations" if you like horror at all.

Two young friends Nico (Gillespie) and Steven (Nick Eversman) decide to take a break from the privleged life and head down to Mexico for some shenanigans. There a vagrant approaches them with the promise of new experiences via a puzzle box as long as they can solve it. Now these two young boys are bringing hell back with them to their homes as they try to outrun their destinies and the sinister Cenobites.

"Hellraiser: Revelations" is just simply a hard film to swallow for fans of the series. It essentially regurgitates many of the plot points of the original one (friend opens box, goes to hell, tries to escape, family gets involved to horrific results) - but it does so in such a way that it rarely feels like an homage to the original one. It feels more like its just steals all the good elements throws them in a blender and spews it out without a whole lot of rhyme or reason to how it should play out. All the good ideas are there, but in all the wrong places with all the wrong executions to go with it.

The structure of the film is crappy, half the time it flashes back with various time jumps trying to create a visceral storytelling experience, but failing to elicit the emotional connections to make it work. The acting is SyFy quality and Victor Garcia's directing (see "Mirrors 2" for another one of his crappy sequels) seems rushed and desperate to cling to some sort of style. Really the only thing good about this film (that earns it the one point out of five) is its special effects. The skinned bodies, the make-up effects, and wounds all look very good for a direct to home video film. Guess that's what you get for a film with a horribly low budget that's directed by a special effects guy.

It also has to be mentioned that the guy replacing Doug Bradley as Pinhead is hilarious. Not in a good way, mind you, but in a "he tries so hard to make the horrible lines he has scary with his mediocre make-up and goofy stares" kind of hilarious. I know the franchise uses Pinhead as a face and/or mascot, but they seriously should have just skipped using the character at all. I would have been much more impressed had they written a way around using him rather than try to replace the iconic actor.

It's obvious that Dimension Films blasted this sequel into fruition for legal purposes rather than trying to make a legitimate film. It rarely uses anything clever story wise and its executions all around are pretty sub-standard (sans make-up effects). It's plot holes are huge, its progression is forced, and Pinhead is a joke. "Revelations" makes "Hellworld" look like a classic piece of film. That says quite a bit just itself. Let's end this review with a nice little quote from "Hellraiser" creator Clive Barker about this film and the use of his name with it: "I want to put on record that the flic [sic] out there using the word Hellraiser IS NO FUCKIN' CHILD OF MINE! have NOTHING to do with the fuckin' thing. If they claim its from the mind of Clive Barker, it's a lie. It's not even from my butt-hole."