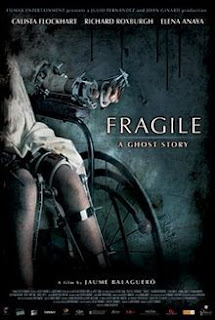 Jaume Balagueró impressed to no end with his co-directorial effort on "[Rec]". That's a given, so when Fangoria released their Frightfest collection and his 2005 effort "Fragile" finally got its US release - I was there. Before I got around to watching it, the mediocre reviews rolled in and eventually it fell into my purgatorial "to watch" heap only to be rediscovered the other day. Even though the film does fall into many mediocre categories, I hardly felt it to be quite as bad as many claimed and still had a fun time with its basic ghost story.

Amy (Flockhart) is an American nurse hired on to help with a children's ward as the hospital its located in begins to close down. When the children begin to tell her about a ghostly 'mechanical girl', she rarely believes them - until unusual things begin to happen. Children's bones begin to break untouched and a mysteriously sealed off second floor seems to beckon inquiry. Amy begins to dig further into the hospital's past only to discover that some patients may have never checked out.

My initial reaction to the film and its idea was "Wow! Another generic ghost film with children and a hospital...whoopee!" and unfortunately, the film certainly starts off this way. It builds a generic heroine (with a rather unimpressive performance from Ms. McBeal who only seems to show up for a handful of scenes) and it works its story at an extremely slow pace. It takes forever to get going. Although Jaume gives us a nice artistic look and dramatic feel for this first half, nothing really exciting or ghostly happens for far too long and the lacking back stories for characters hindered my investment in the general plot. The few 'scary' moments were by the numbers and not all that impressive. The first half simply drags.

Then it gets interesting. The acting picks up with a fairly strong supporting cast, the urgency suddenly appears to get the film going, and the twists of the basic premise start to intertwine. Although its hard to say that any of this is really all that original in its foundations, the execution for the film begins to really carry it. Jaume gives us some cleverly delivered moments of tension and despite rather overdone modern ghost editing moments, we are given a villain to really be scared of. The brief moments of violence (this is the edited version released in the US and I've read its a bit more drastic in the international cuts) work to break the monotony of the film's atmosphere and the final 20 minutes make the film. The second half simply rocks the concept.

Unfortunately, even with a very strong last act "Fragile" has to claw itself out of some very mediocre elements to even earn itself a three in rating. Too many well treaded concepts and not enough strength for on screen scares to earn its way. Jaume desperately grasps to anything worth giving us and his effort is rewarded in the final minutes - but its too late for the film to reach the artistic heights it kept leaping for. A decent film thanks to a strong director, but the faulty build hurts it too much. Mostly for fans of Jaume Balagueró.