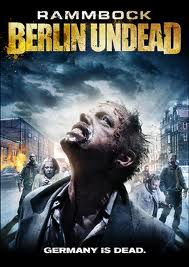 Sometimes its difficult to bring anything new to the zombie genre. With its popularity continuing since the mid 2000s with 'new' zombie flicks, my hesitation for this independent German film was justified. Even though its short run time would indicate something less than impressive, the general solidity of the film earns the watch and "Rammbock" becomes one of the better zombie films executed even if it rarely seems original.

Michael (Fuith) is ready to earn his girlfriend Gabi back. He's going to play it up, return her keys to her apartment in Berlin, and show her just who needs who. Unfortunately, the maintenence men in her apartment don't seem to know where she is exactly and just when things seemed to be going all wrong, a plague of zombies decides to come knocking. Now Michael and his new found friend Harper must figure out a way to get out of the building and to safety...perhaps finding Gabi along the way.

The premise is simple. An everyday man gets caught isolated in a world suddenly overrun with the returning dead. Survival is imminent, but the people around him scheme for their own survival. At many times, "Rammbock" reminded me that sometimes less is more and in this case - it works. The film throws you right into the moment, into the action, and rarely takes the time to back peddle. There's only an hour to get it all in, so there's no time for that. It keeps the pace up and with some solid special effects and more than enough exciting zombie throw downs "Rammbock" never loses the interest of its audience. Something to certainly be praised.

Beyond that though, some of the execution of the film seems flimsy. There are definite moments of oddly placed humor, which can be quite funny, but aren't utilized enough to make it a thread worth the time. The final run on the bike is hilarious in its concept but the film never grasps it strongly enough to make it work like it needed to. These bits of humor are funnier in post thinking then they are at the time of the film. This is partnered with some hit or miss performances (that also make the humor hit or miss) and a plot that seems to stretch some moments far further than they should have gone, including an oddly placed sub-plot with a muscular man whose been bitten.

"Rammbock" impressed with the solidity of its simple story and for its special effects/pacing, but too many misplaced elements like humor and odd subplots hinder the true inspiration for the film and its basic attack on a very well treaded subject. Mostly for those looking for a rather buried gem in horror "Rammbock" is worth the relatively little time to watch it.