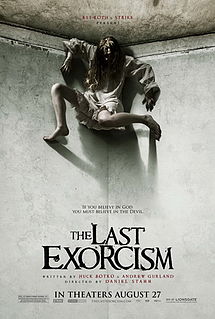 Once again, I put off seeing this 'mock-umentary' due to the fact that a) it was another 'found footage' film and b) exorcism films in the last decade rarely do anything revolutionary to make themselves original. I ended up with it in my collection due to Eli Roth's name attachment and since it is Halloween-tober I decided to throw it in. To my pleasant surprise, "The Last Exorcism" holds its own and does so fairly interesting things with the concept. Despite some areas where it tends to run through the motions, the overall presentation works and it makes for a rather intriguing watch.

Cotton Marcus (Fabian) is a very charismatic reverend whose faith in God has certainly been shaken in the last few years. He continues to preach and perform the exorcisms that he was known for, knowing how well it helps those who need it, but decides to film how ridiculous the entire exorcising process is with some documentary makers. This leads them into Louisiana to help the Sweetzer family whose father has come to believe that his young daughter is being possessed by the devil.

Let's start with the strong points of "The Last Exorcism". Firstly, for its low budget (I read it was roughly 1.8 million dollars somewhere), it does some admirable things to sell its concept. Obviously, with its 'found footage' look it saves some money there, but hiring a young girl who has the natural ability to contort (along with some solid enough acting chops to see it through) and doing the few bits of quick camera work to build the tension to sell off some of the moments was just simply smart film making. Partner this with a solid performance for our lead and some interesting plot twists and "The Last Exorcism" has the makings to be a very memorable film.

Not all is completely brilliant though. Many of the scares are regular exorcism film cliche moments that adds a bit of that Japanese ghost looks with the hair over the eyes and are not all that 'scary', but the film makers certainly make it seem legit enough. Not to mention a rather left field twist for the ending is somewhat ruined with rushed pacing and lacking build. "The Last Exorcism" works on many levels but still falls prey to its genre in many others.

To be honest, I was certainly impressed with how well "The Last Exorcism" sold itself and the concept. It has some clever writing and directing that brings out the best out of a surprisingly good cast. It does run a bit cliche here and there and never really does anything unique with the found footage look - but for what it is, it does make it worth the watch. A big surprise.