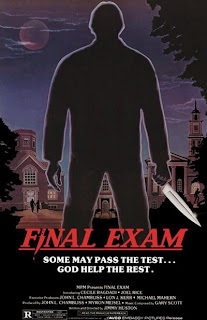 Within the years following the success of John Carpenter's "Halloween", shit tons of copy cats emerged only changing subtle items in their plot. Not only was it masks and trademark weapons, it was also settings and holidays. With "Final Exam" our setting is changed to a college campus on the very last day of finals. Sure, the setting works (it was also used in many other slashers) but the rest of the film fails the entrance exam on making an entertaining example of the beloved genre.

We get introduced to a handful students that still at school on the final day... but a psychotic murder decides to make their last exam a real killer.

Director Jimmy Huston tries to avoid clichés of the genre by having most of the film be filled with gibber gabber and fraternity hazing trying to hide itself as "character development." Development is all fine and dandy when you have a good script and actors but "Final Exam" lacks these essential elements for "character development" to work.

Due to this the film takes FOREVER to get moving and for the killing to start up. Some view this as a nice buildup... I however found it snooze educing as the dialogue and acting makes the sluggish pace hard to sit through at some moments. Hell their isn't even a strong heroine or hero to follow (a Laurie Strode from "Halloween" for example) so one just mindlessly watches as our killer stalk pointless characters.

Once the killing starts the film gets interesting as Huston does use some unique shadow techniques to hide our villain as he stalks our various college students. The problem with our stalker however is that no motive or identity is ever given to why he is killing these students. It worked in "Black Christmas" thanks to a clever script but in "Final Exam" it's just lazy due to poor scripting.

As for blood, "Final Exam" is light. Sure it has some of the red stuff but Huston is more interested in attempting to build suspense and he does succeed on some level, but not wholly. Fans looking for the red stuff are better off hunting down the over-the-top campus slasher "Pieces" to satisfy their craving.

Out of all the slashers that came out in the golden age of the subgenre, "Final Exam" fails to pass the grade. It's got a tired, sluggish plot and weak acting with no blood or gore to make up for these lapses. In all this is one of the more forgettable slashers that I've seen.... and I've seen a lot mind you.