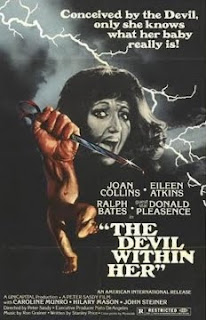 The 70s was loaded with campy horror films, films that were made be taken seriously but thanks to ridiculous plot elements and bad acting they became unintentional laughfests. Most of these campy efforts were "Exorcist" and/or "Rosemary's Baby" knock-offs. "Beyond the Door" and "The Manitou" are two rip-offs two films in this category that had me on the floor with my gut aching with laughter. "The Devil Within Her" (not to be confused with "Beyond the Door" which was released in Great Britain with the same title) is one of these unintentional campfests that makes an excellent triple feature with the afore mentioned films.

Joan Collins plays a dancer that gets cursed by an evil midget (you read that right) after she avoids his sexual advances after a performance. The curse leads her new born baby to be a little devil, having superhuman strength and the ability to morph into an evil midget to kill off her loved ones. Can she break the curse with the help of a nun before the baby drives her mad?

The whole concept of this film is beyond ridiculous and it's amazing that the cast can keep a straight face throughout the film. A midget cursing an unborn baby... come on! One can't help but laugh when the new born slugs unsuspecting victim's faces, breaking their noses.

What's amazing about these campy crapshoot horror films is that they always managed to get great casts. We get Italian cult icon John Steiner ("Shock"), Hammer Horror icon Ralf Bates ("Horror of Frankenstein", "Dr Jekyll and Sister Hyde") and gorgeous Caroline Munro ("StarCrash", "The Spy Who Loved Me"). Sadly Caroline is mostly wasted as the best friend but her beauty makes it easily forgivable for this reviewer. Donald Pleasance ("Halloween") does what he can as a confused doctor but I'm sure at the end of the day he's happy to collect his paycheck. Joan Collins plays herself (can she play anything else) but she is damn beautiful, bearing nice amounts of flesh proving her 43 year old body looks like it belongs on a 25 year old.

"The Devil Within Her" is a silly, unintentionally funny hybrid of "Rosemary's Baby" and "It's Alive" that is unfocused in the hands of Hammer director veteran Peter Sasdy ("The Vampir Lovers"). The film ended up so bad that it tried to hide itself under multiple titles around the world, including but not limited to "I Don't Want to Be Born" (it's original UK title), "Sharon's Baby", "The Monster" and "The Baby." Under any title, it still sucks but it is much watch for fans of unintentional campfests. Alcohol is recommended for full effect.