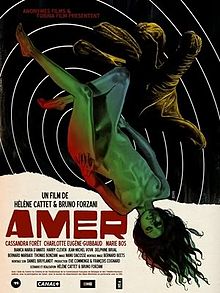 Throwback horror in this day and age isn't all that original. It's either done with complete earnest to idea like the tense "House Of The Devil" or done with enough tongue in cheek to remind us of why it was so much fun like "Chillerama". Rarely though, does any one homage the now very distinct and punctuated giallo style of the 60s and 70s (sans the nods via Rob Zombie). This is what makes "Amer" so unique. Not only does it run with the style at full force, but it makes it a full on art form for the full length of this French thriller.

Ana (as played by three different actresses discerning each age group) is traumatized as a youth towards the mysterious and sexual. After years of dealing with these issues that leave her somewhat disjointed, he decides to return home to chateau where it all began.

It's really hard to properly describe "Amer" as a plot or characters. This film ably pursues and succeeds at being atmosphere. When I say that this thriller takes what Dario Argento or Mario Bava was doing with the style and makes it art - I sincerely mean that. For a thriller, the film rarely has any plot, villains, or dialogue for that matter. It's an almost wordless character study of a mind collapses done in throw back form complete with wicked effective framing for shots, outrageous color schemes including blasts of red, yellow, blue, and green, rapid fire edits to balance out the long paced shots, stupendous acting done with the majority of it through close ups of the eye or various other body parts, and (of course) a legitly augmented 70s style score that only bursts at the most impressionable times. In these ways, "Amer" completely envelopes the viewer in its giallo style with so much intensity it hurts.

Why then is "Amer" not a perfect film if it perfectly exhibits the style in all of its throwback and distinct glory? That's just it. Directors Hélène Cattet and Bruno Forzani do it so well as an art form that the film feels completely out of context as a film. The relatively plotless plot seems to meander a bit too much in the middle section (particularly when our main character is a young woman out to town with her mother) so that by the time we get to the to the finale, where it begins to bring it full circle to its stunningly well down first third of the film, the interest in what will happen has waned a bit. Luckily the film ends on an extremely well executed high note that ably brings back a killer's POV and gloved hands that were so distinctive for the style to begin with.

Although I have to admit the visceral journey that "Amer" takes the viewer on with its bombarding giallo force is a spectacle that any well versed horror fan should take is amazing, the film itself gets almost too artsy for its own good really faltering on giving us the reasons to give a rat's pajamas about the outcome of the characters or film. That being said, "Amer" will please any fans of the long forgotten genre and hopefully brings about a revival movement for this highly underrated film style.