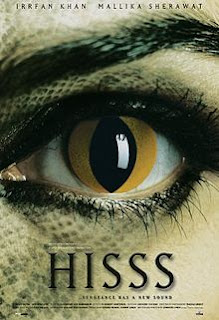 I had really been looking forward to "Hisss". Jennifer Lynch caught my eye with the surprising "Surveillance" and the idea of a cross India/US horror film based on a snake goddess simply hit my curiosity chord. The lacking news about its US release killed some of the hype behind it and its rather magical appearance in Red Boxes without a legit release certainly got me worried. My worries were justified. "Hisss" can now be filed under the MASSIVE DISAPPOINTMENT column with its asinine artistic flourishes, B-movie grade script, and awful SyFy looking visual effects.

A police inspector (Khan) becomes baffled by a rather vicious series of murders. It would seem that Indian legends might be true, as the Nagin (Sherawat), a snake goddess, has come to reap vengeance in an attempt to free her trapped lover from a deranged American (Doucette) looking for immortality. Can he put aside his logical thinking to save the lives of civilians or perhaps let the Nagin do her thing?

Let me begin by saying that not everything about "Hisss" is a massive disappointment. Khan as the police detective does an admirable job with the role giving it a nice human touch and Robert Kurtzman showcases some great make-up design with the physical special effects. The transformation scenes into snake/person thing are very cool and well done. Even Jennifer Lynch seems to craft the occasionally solid artistic moments here and there for some moments worth the time watching.

These are just not enough to over come the massive flaws that are created by some poor character development, shoddy scripting, and Jennifer Lynch's over bearing attempts with making it all an 'artistic venture'. Our resident villain for the film (which is not the snake lady mind you) is over acted and over the top, our supporting cast are shades of real characters, and the script they have to follow is as just as over the top silly as the horrible CGI snake effects particularly those of the giant man sized cobra. This is partnered with far too many scenes that will have you scratching your head in confusion as the "artsy" edits and random moments (like a crying naked woman that hangs upside down on a lamp post) seem to come out of left field. At times I wasn't sure if I was supposed to laugh or cry at the sheer ridiculousness of this film.

Maybe I'm the idiot. Maybe I don't get the Bollywood references and cultural differences that are certain to be shoved into this film since I can't stand the Bollywood look and feel. Maybe "Hisss" is just one of the biggest WTF moments for this year. Doesn't matter though as many of you may agree - this B-grade horror film is just that done with enough faux artistic moments to make it confusing and silly beyond its own concept.

BONUS RANT: Perhaps the strangest scene in the entire film is when our snake woman (in human form) actually has snake sex with her lost lover (in snake form) towards the end of the film. It's done in completely serious form that references the mating ritual at the beginning of the film. On paper it may have looked like something legit, but on the film...yipes...its just very awkward for everyone.