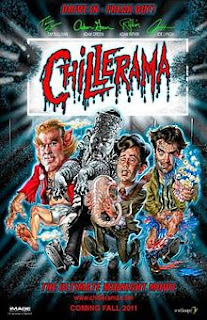 What can really be said about "Chillerama" except that its a cult film for cult film fans made by cult film fans. Although here at Blood Brothers we have been fans of each of these four directors for some time (with highest praise for Adam Green), it was only obvious that a film who homages classic horror with four separate short films dedicated to certain time periods would rank up there quite high...even if it is done completely tongue in cheek the entire play time. It claims to be the ultimate midnight movie and it ranks up there with my favorite midnight movies for sure.

When a local drive in theater is about to be shut down, a final showing of a handful of short horror films seems to be the perfect send off. Modern classics like "Wadzilla", "The Diary Of Anne Frankenstein", and "I Was A Teenage Werebear" are all on the selection tonight...but when the dead begin to rise these young folk may just have to find a way to survive their last drive-in experience.

I won't get into each section and analyze those for you...because honestly, it needs to be seen to be believed and if you are a fan of any kind of 'cult' style film making then this is a MUST SEE. Each of the four directors brings their own flavor of over the top humor and pushes the limits of each short only to succeed over and over again. Although its sure to gross you out more often than not (Joe Lynch and his "Zom-B Movie" goes to some significant extremes to do so), the way that these young horror fanatics homage their respective eras is impressive. The musical numbers of the greaser era in "I Was A Teenage Werebear" are delightfully silly and fitting, the poor background screens for "Wadzilla" bring back young memories of watching horrible Godzilla films perfectly, the black and white and obvious low budget of "Anne Frankenstein" makes for some hilarious moments, and the sheer aggressiveness and grotesqueness of "Zom-B Movie" certainly brings to mind those late 70s and early 80s schlock films. This of course is why you MUST SEE it.

On top of its beyond clever concept and stellar directorial work, "Chillerama" succeeds in getting all of the stories pieced together in quite an efficient manner. Although not quite as complicated as "Trick R Treat", "Chillerama" gives us a reason to see all of the different stories in styles in a way that makes the whole film feel like a whole film rather than a bunch of smaller films tacked together. Not only do they do it, but they make it a hoot to watch in the process, which sells the idea even further.

If you are looking for more of a straight horror film, that's not "Chillerama". It's outrageous, completely tongue in cheek, and a fantastic watch for those versed in classic genre films. These directors/writers just keep getting better and better with their careers and this latest anthology film proves that they have the foundations to go even further.