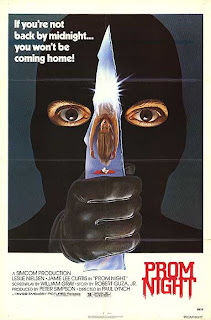 "Prom Night" is a slasher that has grown with me over the years with multiple viewings. When I first saw it years and years ago I wasn't impressed but now having seen tons of films in the slasher genre, "Prom Night" now doesn't seem that bad. It's won me over with it's charm, much like an ugly dog. Sure it's flawed and overloads the senses with awful disco music (the horror! the horror!) but it's got a good cast and some good suspense stalking moments.

We open a number of years ago when four kids, while playing in an abandoned school, accidentally kill one of their friends when they scare her out a window. Jump forward six years and the kids are now in high school getting ready for their senior prom. Someone, who witnessed the murder, has other plans and decides to take reek his vengeance on all high schoolers most important night.

Slasher fanatics will notice the cast first which contains scream queen Jamie Lee Curtis, in one of many of her slasher film appearances. Out of this, "Terror Train" and of course "Halloween", this is the weakest mostly due to her character not providing enough to the plot. Though she is the main character, she almost seems like she's going through the motions. She does shine in her jealous rants with a blond bombshell fighting for the love a hunk, a hunk that just happens to be involved with the death of Curtis's little sister six years before. Oh and she has some sweet ass disco floor moves that will make sure to any guys pole rise to attention.

Another recognizable name in the cast is Leslie Neilson, a few years before he won over the world with his comedic performance in "Airplane!". Though I love Neilson, he's mostly wasted and his character even disappears halfway through the film with no explanation. Plot hole anyone?

Director Paul Lynch's style is minimalistic but he has the plot move at a nice building pace and is even able to craft some suspenseful stalking sequences, especially when our ski masked killer chases a girl though the dark hallways of a school with an axe and disc music ominously playing in the background. He does overuse soft lenses giving the entire film a white hue, a look that doesn't look that well when given a digital transfer on DVD.

As I've warned, the soundtrack is mostly full of bad disco music (even the theme song is disco). Disco may be identified with the 70s but it was still alive and kicking when 1980 rolled around. The overload on disco styles and music does cause some unintentional laughter and dates the film but it's all in good fun.

"Prom Night" may not be a earthshaking slasher but it's not bad. It's got a good cast and some genuine suspenseful moments to make up for the lack of blood (a decapitation on the prom stage is very memorable though). Worth a look for horror fans. "Prom Night" would be followed by three unconnected sequels later in the decade ("Hello Mary Lou: Prom Night II", "Prom Night III: The Last Kiss" and "Prom Night IV: Deliver Us from Evil") as well as an atrocious remake in 2008.