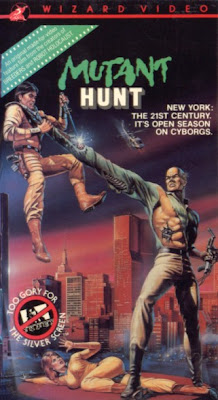 In the mid-80s home video revolutionized how people saw movies. Along with the home video market soon came idea of making films that would be made-for-video without the luxury of a theatrical release. Though producer Charles Band was busy making theatrical films with his Empire Pictures production company, he was at the head of the pack producing cheap pieces of direct-to-video junk for his Wizard Video outlet. With marketing gimmicks such as "too gory for the silver screen" printed on their eye-catching box artwork, Band suckered in horror and cult movie buffs to see these trash pictures that had no chance of living up to the glorious paintings that adorned the cover. "Mutant Hunt" is one of these releases that's artwork attracted my attention as a child that didn't live up to my trash loving expectations.

In the near future, a psychotic madman injects three cyborgs with a drug that causes them to be psycho sexual killing machines that mutate at an incredible rate and become ten times stronger than a normal human. Now a mercenary, which I like to refer to a cheap-jack "Blade Runner", must stop 'em before they brutally rape and kill the entire region.

With a title like "Mutant Hunt" one can't expect art. The acting is just above porn level, the sets are non-existent, the music is lifted from "Breeders" and Tim Kincaid's directing is again uninspired. Hell the plot even leaves too many doors open such as why the hell does our villain inject these cyborgs with a mutation psycho drug? His intentions is unbelievable. The one highlight is the practical special effects which includes some gore and tops out when a cyborg starts ripping his face apart. Does it live up to the marketing gimmick "too gory for the silver screen"? Not by a long shot but the effects at least keeps the film trucking along.

Not that I was expecting anything spectacular with a title like "Mutant Hunt", but for a film that not only has 'mutants', but 'mutant cyborgs' this should have been a lot more entertaining than it is. The formula for a great trash classic just doesn't compute thanks to the atrocious acting and bland direction making "Mutant Hunt" far below the loveable flaws of Charlie Band's theatrical efforts at the time. You think that Tim Kincaid would have learned a thing or two about making enjoyable bad movies after helming both "Robot Holocaust" and "Breeders" prior to this but nada.

Still "Mutant Hunt" has it's small, very small legion of fans and Charlie Band finally finagled the rights to the film away from MGM and recently released it on DVD. Don't get your hopes up though as this isn't comparable to the "stellar" DVD release MGM gave to Kincaid's previous direct-to-video trash venture "Breeders". That release was transferred from original film elements. What you get with "Mutant Hunt" is an old VHS transfer. Watchable but still on the blurry side. Still it's better than hunting down an over-priced worn-out VHS ex-rental.