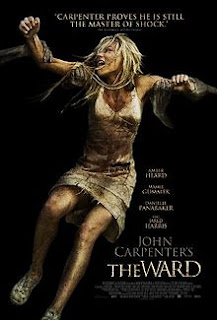 The return of John Carpenter. It's been ten years since his last full length film (although two "Masters Of Horror" episodes held us over) and his comeback to the realm of horror directing isn't quite what I expected. "The Ward" is a rather low key and less comic-y affair than most of Carpenter's later output and it focuses more on atmosphere like his earlier material, which is something I can dig. The film itself suffers from a few flaws that undermine the experience, but overall I would say that its a decent return to for for John Carpenter even if its not up to par.

Kristen (Heard) is captured by police after she sets a house on fire. Her memories before the incident are none and her stay at 'the ward', a psychiatric study area for a group of mentally ill women, seems to indicate that something is seriously wrong. When she begins seeing the ghost of a dead young woman in the ward, that seems intent with harming her, she suspects that the girls that have gone missing may have been killed by this pissed off spirit.

Perhaps its because I have seen far too many of the Asian style ghost films in recent years, but I appreciate the fact that "The Ward" was not like them in almost any way. It's very 'American' in its telling of this ghost story with focus on plot progression and character watching. John Carpenter uses his older style of long shots and relatively low exposition for this film and it creates a nice atmosphere to get sucked into. He throws a bit of that old school slasher feel into the actual 'disappearances' of the girls and its a fairly well blended unit of tension and expulsion through violence. His directorial work here is quite solid and earns some of the relief to the suspicion that he lost his touch.

Other than that though..."The Ward" crafts a pretty solid mediocre film. Amber Heard is boring in the lead, her supporting cast worse at times and never better, and the general lacking budget for the film hurts as it seems like a film trying to look based in the 60s rather than actually looking like the 60s. To top it all off, the rather intriguing script is drug through the mud with plenty of lackluster banter (that Carpenter can pull off in moments, but not for the the whole film) and a plot twist that is executed well, but far from original.

Although Carpenter continues to prove that he is a viable force within horror in these modern days with a strong directorial presence in "The Ward", the film succumbs to far too many cliche plot moves and too many underwhelming performances from the cast. With a higher budget and a stronger cast the film might have overridden its plot holes and sold the twist at the end, but the film still feels like a transitional piece for the once mighty horror icon. One that sees him pulling some elements from his past career to the present.