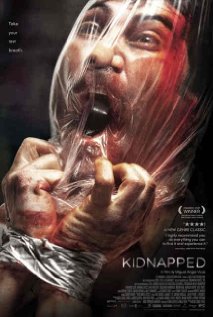 How do you spell kidnapped in Spanish? As this little independent horror/thriller would indicate, you spell it I-N-T-E-N-S-E. From minute one of this Spanish film, the tension skyrockets out of the stratosphere and never comes down leaving the audience a ragged and often disturbed version of their former self. Throughout my theater going experience (thanks to the very amazing Mile High Horror Film Festival), I cringed and gasped and simply awed at the simplistic spectacle that "Kidnapped" brought out on a silver platter. For sure one of the best films I've seen this year.

Jaime (Cayo) lives in relative luxury with his wife (Wagener) and daughter (Velles) in their brand new home. When a trio of masked burglars decides to ransack the family in their household one night, this average family will find themselves in life or death circumstances. As the robbery increasingly gets thwarted and soured by unexpected flaws of plan, this simple family must decide whether fight or surrender...a choice that may cost them their lives.

Reportedly, I've read that "Kidnapped" was filmed in 12 shots, although other reports do indicate that many of the cuts in the film were spliced in obscenely well hidden spaces. Yet it remains whether this is true or not, that the film feels like it was filmed in the most limited amount of editing possible and its stunning to think about. That's what matters. The endless shots bombard the audience with a sense of realism and realistic time as we ponder and sweat out the eventual ending or our protagonists. This realism is only heightened by the gritty filming style, the more than impressive acting, and the relatively low key added effects including score. Although what score there was certainly undermined the whole film with a sense of dread and was perfectly fitting. This sense of realism is truly the most horrific part of the film and director Vivas brings it to life in the most disturbing ways.

Forewarning though, "Kidnapped" is not for the weak of heart. Not only is the tension at 11 the entire film and the realism extraordinarily strong, but the film goes to some dark places in the plot that are horrifying just themselves. The plot is simple. It's rather basic. We've seen house raid movies before, but the realism combined with some of the dramatic turns of events (partnered with enough artistic sense to pull it off without seeming like a grindhouse feature) will make your toes curl. I'll just leave it at that.

"Kidnapped" was impressive from beginning to its rather sudden finish. The execution was incredible and even though the plot was basic, the artistic sense to pull off many of its outrageous ideas (including some split screen moments that made me want to become an alcoholic with tension) makes this film a horror fan must see. It's disturbing, but the respect for how it was done is immense.