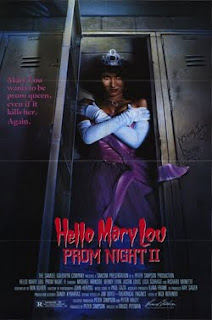 "There's no God, Buddy! And there is no Heaven, and do you know what pissed me off the most? NO FUCKING WINGS!" - Mary Lou

What?! A sequel that I like more than the original... yep, that sure doesn't happen much. Well this seven year later sequel in name-alone to the 1980 Jamie Lee Curtis slasher a visual feast for the eyes and loads of bloody fun.

In 1957, beautiful high school sleaze Mary Lou (of the rhyming title) gets burned to death at her high school prom by her jealous boyfriend. 30 years later she has returned from the dead, possessing the body of our virginal heroine in order to wreak revenge on her old boyfriend (now the high school principle) and cause the senior prom to go down in flames.

Other than the title, the producer and the name of the school there is hardly anything that ties this film to the original. The original was a standard slasher in the mold of "Halloween". Here the filmmakers opt for a supernatural approach reminiscent of "A Nightmare on Elm Street." The best way to describe this film is the amalgamation of "Nightmare on Elm Street 1 - 3" and "Carrie". We have a supernatural killer whom was burned to death (like Freddy Krueger) return from the grave and terrorizes people ala dream-like sequences. It resembles "Nightmare 2" in that she wants to possess a body and "Nightmare 3" in its tone and clever visual effects.

The visual effects are the real attraction of this likeable horror outing as there are wonderful dream-like killing sequences that Freddy Krueger himself would be jealous of. Seriously Mary Lou would be a wonderful bride for a knived fingered maniac! My favorite kill is when she squishes a girl hiding in a locker. Crushing!

The cast is also strong for a slasher headlined by character actor Michael Ironside, famous for his villainous roles in "Scanners" and "Total Recall". Sadly he is underused here and mostly sleepwalks through the script on his way to destroy his old girlfriend once and for all before he kills his boy and sends his boy's girlfriend straight to hell. Newcomer Wendy Lyon however shines as our virginal heroine trying to break free from her religious fanatic parents. She's got the wonderful aura of innocence but is also able to pull off the sleaziness once she becomes possessed by Mary Lou. To top it off she has a body to DIE FOR as she bears it all, frontal and back, as she stalks a student naked in a locker room. This is seriously one of the best nude scenes EVER in a horror film.

The production values of this slasher are also top notch with slick directing and editing giving it a nice stylish, polished look about it. Director Bruce Pittman is able to make the film look far more high budget than it was and that I give him an applause. Also since this was made in 1987 Pitman crams 80s fashion and styles down the audiences throat but it's all in good nostalgic fun.

"Hello Mary Lou: Prom Night II" has a plot recycled of other films and is nothing more than a combination of "A Nightmare on Elm Street" and "Carrie", still it blends the familiar plot devices slickly to make a real hoot of a slasher film. Mix that with stylish directing and eye popping visual effects and you have a must see horror film for fanatics of the "Nightmare on Elm Street" franchise. Hell this is better than "Nightmare 4-6" and there isn't even the need to see the first "Prom Night" in order to know what the hell is going on. Mary Lou proved to be a popular enough slasher "icon" with horror fans that her character would return in "Prom Night III: The Last Kiss" to go on a massacre one last time.