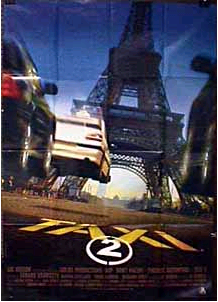 As interesting as it is, "Taxi 2" is a rather odd move for the franchise. The first film was built on character chemistry and lots of great comedic moments but lacked some of the action one expects from a film written by Luc Besson. This film is the exact opposite. It has almost no character arcs, our two leads rarely spark the same fun moments as before, but the action and hilarity of situation are almost non-stop. Making it a more than an entertaining film to watch, but rarely as smart as the first one was with its dialogue or characters.

Daniel (Naceri) is still up to his old tricks. He continues to promote his taxi with his incredible driving abilities and his continued relationship with girlfriend is moving to the next level. When he must take her military father to meet the Japanese minister of defense for a drive around Paris, a group of rogue Yakuza step into to thwart his plans. Now Daniel must re-team with Emilien (Diefenthal) to get the Japanese delegate back and stop these evil gangs from causing strife between France and Japan.

Although this film isn't nearly as strong in its writing or characters, the laughs that erupted from me were non-stop. This film is really funny with its odd combination of offensive stereotypes (the fact he has to yell ninja to start the car for the minister makes for some great awkward moments) and ridiculous over the top action. Literally, ninja come bounding in out of random places and the plot moves in some of the most obscene ways for the sake of visual gags, like dropping his now 'floating' taxi out of the back of a plane, that its hard not to be impressed with how far they go for the sake of a joke.

"Taxi 2" does expect that you have seen the first film. It gives no explanation to how the main characters know each other or how their relationship works, so don't skip out. This film rarely builds the characters and expects you to just be in the loop, which is part of its problem. Sometimes it assumes too much and it hurts that we don't quite get the depth of feelings that the first one conveyed. That's okay, because its ripe with car stunts and ninja action to bury those obvious plot holes. Ironically it works out quite well as an entertaining piece of film.

This sequel ranks right up with the original in quality even if the focuses for the two films seem to be in completely different lights. This one is packed with gags and action and it leaves one crying with laughter, but doesn't quite stick as well after the play time is done. It does have some amazing moments of dialogue and action sequences though - which is enough for this reviewer.