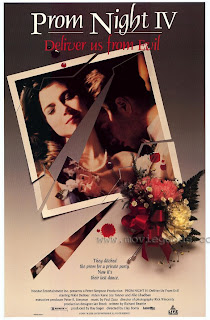 With the character Mary Lou failing to win over horror audiences as a franchisable character with the missed opportunity "Prom Night III", filmmakers decide to ignore the last two Mary Lou entries and take the series in a new direction. Gone is the comical overtones substituted for a deadly serious tone reminiscent of the first entry. Also gone is Mary Lou substituted with a killer Catholic priest. Though the new approach failed to win over audiences, it won over me and I find "Prom Night IV" to be one of the more underrated of all the slasher sequels that fill video store shelves.

Like "Prom Night II" we open with a high school prom in 1957 where a psychotic priest decides to brutally kill some sinning teens. The church hides the incident by locking up and drugging the Priest into a catatonic state. Thirty years later, he awakens, escapes and decides to make a Prom Night a living hell for two teen couples having fun at a vacation home.

The deadly serious tone was a needed shift from the overly silly third entry. I also dug the bleak, cold snowy backdrop of the film taking place in the dead of winter. The best part however is Ken McGregor as our killer priest. This guy is fucking psychotic! Definitely good enough to make slasher fans forget that Mary Lou chick from the last entry.

Director Clay Borris is also able to craft some actual scares. Hard to believe for a forth entry into a floundering franchise. I was shocked to be dished up some suspenseful kill sequences. Mix that with an attractive young cast (headed by cutie Nicole de Boer) and some amazing sex scenes and you have the must have ingredients for an enjoyable slasher.

Still, even with that praise, there's some plot elements that tend to annoy the shit out of me. One is how the church decided to lock up and sedate the killer priest instead of turning him over to the authorities. Really? Second is after thirty years the Priest hasn't aged a day other than having long hair.

"Prom Night IV" is not a groundbreaking slasher but it works on revamping the franchise by taking the series back into serious territory. The bleak approach mixed catholic imagery works on giving the film a stark, attractive look. Sadly the film is overlooked by horror fans for the simple fact that it's the fourth entry into a franchise. That and for the fact the "Prom Night" series is inconsistent in its approach with serious entries, comical entries and lack of continuity in story and characters. If one can look beyond the inconsistency flaws I believe more people would agree with me that the "Prom Night" franchise is one of the most underrated horror series that seemingly no one talks about. Sadly, even though I actually liked this fourth entry, it marked the end of the series despite an open-ended ending allowing for another sequel.