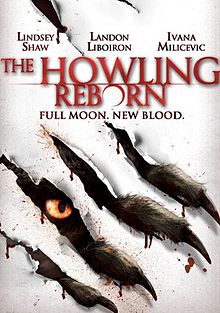 Out of all the recent horror sequels to long dead franchises, such as "Children of the Corn" and "Hellraiser", the last I would expect another entry in is the damn "Howling" series. Seriously who thought this was a good idea? Did they see the seventh film "Howling: New Moon Rising"? As cliché as it may be I am being completely honest in saying it is one of the worst films I have EVER seen. That entry should have welded the door of the "Howling" franchise shut for good but low and behold, sixteen years later part 8 quietly emerges on the sales racks, with distributors hoping the bad aftertaste of a number of the last sequels has faded with the older horror film fan crowd leaving the young, "Twilight" inspired viewers to lap this bandwagon effort up.

Well we get introduced to a young nerdy high school student right before graduation that has a hard-on for the local bad girl in his class. He somehow manages to win her over but not before his dead mother comes back from the grave, showing her son that he has a really hairy situation on his hands. You see, she's a werewolf and she's come back for her son to tempt him to the animal side. He will have none of it and whilst locked in a high security high school, he must protect his true love from his mother and her legions of the hairy killers.

I will admit that the production values shocked me at first as they are very reputable for a direct-to-video feature. The special effects are impressive (without an overabundance of CGI) and director Joe Nimziki gives the film a unblemished, sterilized look with its polished white and black color spectrum. The acting by the young cast is also commendable by our two little lovebirds Landon Liboiron ("Teranova") and cutie Lindsey Shaw.

The problem I have with this film is that that it's a "Twilight" knock-off complete with a story that's focus is on love and throws in werewolves for good measure. This is a fucking "Howling" sequel... not "Twilight" so let's see werewolf carnage without the PG-13 "Twilight" crap! Hell there is even a character that takes a jab at the recent "Wolf Man" remake by stating that werewolf movies always star 40 year old fogies. Fuck that, give me my 40 year old fogies as opposed this teeny bopper crap. Hollywood's obsession with youth drives me bonkers!

Not only does our plot take inspiration from the dreaded "Twilight" series but it's got tons of ridiculous plot holes and conveniences. First of all this high school has a security system that would make the Umbrella corporation from the "Resident Evil" franchise cum. Seriously, giant metal doors for lockdown? Also how the hell is our hero werewolf able to build a flamethrower in his chemistry lab? Why does the chemistry lab stock silver nitrate? Why does the security guard have hollow point bullets? Why does his mom abandon him, fake her own death only to show up on his graduation? How the hell is he able to bring his girlfriend back to life by shocking her with power cables from the elevator? It's enough for the beast to come out within me!

"The Howling: Reborn" is a sequel I'm really torn about. The fact that the plot has no connection to any of the other "Howling" film has no merit as most of those were standalone plots that just happen to have werewolves. From a filmmaking standpoint this is the best sequel as the acting is good and so are the effects. What burns my bacon is at least the other entries were at their roots horror films through and through, unlike this "Twilight" inspired love plot. It's like the producers got the rights to the "Howling" name, hired a writer to make a film like "Twilight" with werewolves and hope the title would suck in horror fanatics to see it. It worked on me, I'll admit, as no way in hell would I have ever watched it without the word "Howling" in the title. Due to that it fails to rejuvenate the franchise as horror fans hate "Twilight" and "Twilight" fans wouldn't watch a "Howling" sequel. That leaves "The Howling: Reborn" in purgatory, a film without a clear definition on what it wants to be. Hey, look on the bright side... it's better "Howling: New Moon Rising."