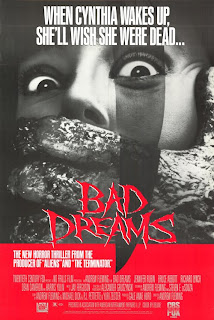 Freddy Kruger was slaying at the box office with the recent sequel "A Nightmare on Elm Street 3: Dream Warriors" being a highly enjoyable and respectable follow-up, something not relatively common in the horror genre. Producer Gale Ann Hurd ("The Terminator", "Aliens") decided to produce a "Nightmare 3" clone so she gave novice director Andrew Fleming a chance to direct his first feature film. The final results isn't too shabby, even if the similarities between this and "Nightmare 3" are so close it could be grounds for a lawsuit.

The plot has a young woman survive a massive cult suicide. Years later she awakens from a coma in a hospital for troubled youths. She keeps having this one pesky problem. The problem is that she keeps seeing the cult leader (Richard Lynch, in another sinister performance), sometimes in a charred form (sound familiar?!) in her dreams and he even starts to murder other patients until she decides to finally fulfill her pact and take her own life.

Not only is the plot derivative of "Nightmare 3" but the filmmakers went even as far to cast Jennifer Rubin, notable for playing a junky in the very film this picture is ripping off. She does a credible job, as does Bruce Abbott ("Re-Animator") as a concerned psychologist. The limelight is stolen, not surprisingly, by Richard Lynch who is one of the best character actors to turn to in order to get sadistic, deadly villains (see "Invasion U.S.A. " and "Sword and the Sorcerer" if you've never heard of this guy... he's great). We also get Dean Cameron (known for playing a horror movie enthusiast in "Summer School") as a self mutilator with a hard-on for cute patients.

The make-up effects are fantastic allowing Richard Lynch to look frighteningly awful in his flesh burned form (ironically Lynch suffered from severe burn injuries in real life so I wonder how he felt about taking on this part). Sadly, for most of the film, Lynch is seen as himself, without the make-up effects so they are somewhat underused. As for blood there are still some gory scenes but most of the killings are actually off-screen so gore lovers might be a little disappointed.

For a "Nightmare on Elm Street" knock-off "Bad Dreams" is actually not too bad. The ending tries to be clever, and fails but there's enough interesting visuals, killings and likeable cast members to appease horror and slasher fanatics. It won't give any viewers bad dreams but it won't put them to sleep in the process either.