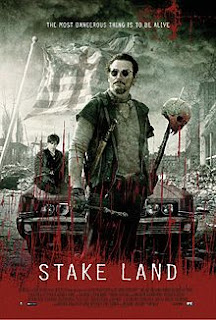 There has been some stunningly good horror movies released this year and despite the recent re-vamp-ed bloodsucker fad continuing to suck the life from the genre, inventive spins on the mythos thrives. Just take a gander at Stake Land. Combining the super depressing post-apocalyptic vibe of The Road and twisting it with a solid and visceral vampire hunter tale, this ferocious and artistic vampire film cuts deep with great directing, a great story, and more than able cast. Certainly a must have for those into artistic horror films.

Martin (Paolo) becomes an orphan when his family is slaughtered by a vampire, one of many stricken by a new disease that is wiping out most of the population in the world. By chance, he is saved by a grisly vampire hunter only known as Mister (Damici) and the lone wolf takes him under his wing. The two then begin their long trek north to Canada, evading religious zealots and vampires, while cutting through some towns of survivors and making their way to safe haven known as New Eden.

The premise is epic, but Stake Land focuses down on the nuances and subtlety of its characters to drive the messages and story home for the audience. The balance between the epic and often creatively visual storytelling and the well crafted character work highlights this film as being an artistic and devastating tale of a future for this world. Martin and Mister's story is one of heart breaking sacrifices and grasped hopes as we follow them and learn to love and hate the world they live in. The two leads are the heart of this film, brought to vivid life by stunningly well acted moments, a superbly written script, and an insightful eye for the details by director Mickle. It scares at all the right moments unafraid to show the horrors of the vampire scourge with visual efficiency (seeing a vampire drop a drained bloody baby with the extremely well executed special effects is enough to make one squeamish) and still packs in enough thoughtful human horror (the terrifying religious zealots and their devotion to God's wrath is just as scary as inhuman bloodsuckers) to create a tension matched with its writing.

This is all painted with a dramatic post-apocalyptic touch that creates a very 'real' world for these intriguing ideas and characters to gallop in. Mickle does a damned fine job balancing all of this in the film and still comes out on top even when the film seems to fizzle out towards its final moments. He paints it with an edge that brings to life the brutality of its woe, but does so that even the audience never loses hope for our struggling group of survivors even with its very limited dialogue. Enough so that when any one of them bites the dust its kind of devastating for our psyche.

Many vampire films have focused on humanizing the creatures as of late, but Stake Land does its best to make a world where its irrelevant to the morality of the monster. They are here, so people just deal with it. In a way, its refreshing, inventive, and quite realistic at how the main characters have to deal with it. This is what makes Stake Land the visually stunning and deeply written tale it is.