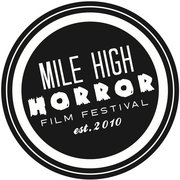 There it goes. The highly anticipated Mile High Horror Film Festival for 2011. Three days jam packed with a slew of different activities and despite a slow start driving in circles looking for the damn place, my arrival was greeted with a rocking "And your name, sir?". All right, perhaps Blood Brothers Reviews isn't quite the epic review site that I'm the guy that earns trumpets when he walks in the room (you guys are getting us there though so go you!), but the vibe of the festival was accordingly festive. Props of horror and Halloween scattered about, bubbling cauldrons, folk dressed to the nines as goblins, witches, a giant 7 foot tall bloody rabbit...it was a party. Just the sort of thing I was hoping it would be and it was only kicking off for the long weekend.

The Mile High Horror Film Festival establishes such a ambitious vibe that its hard to wipe the smile off my face even a half a week later. It was professionally organized, utilizing the classic space of the Tivoli Theater in all of its old school glory, and the staff were more than supportive and helpful. The general efficiency of the festival is to be admired and director Timothy Schultz can be given a hand for that.

Even though the space and the organizers seemed well prepared for the onslaught of horror fanatics with booze and Red Vines (Mmmm...Red Vines), the films are the true highlight of this festival. Although I was unable to attend every screening, I packed in as much as I could (I'm kicking myself for missing the third block of short films which seemed to include all of the best ones I hear) and ended up spending around 24 hours total at the venue with a whopping 18 hours of that spent in actual films. The selections were STUNNING. As if the general party vibe of this gathering of like minds in religious manner to celebrate the greatest genre in film wasn't enough, the films shown included some of my favorites for the year - a task not as easy as it would seem. Spanning 11 countries, the slew of different horror films ranged from classic Grindhouse styles to artistic low key spins on well known mythos. The wide range of films and their well picked quality only showcases what The Mile High Horror Film Festival has to offer in the upcoming years.

This is all iced over with some great celebrity meet-n-greets. Directors, actors, and stuntmen all showed their appreciation to the fans by showing up signing what must have thousands of autographs and doing insightful Q&A sessions for those hungry to learn more. The list of celebrities was extensive and impressive including highlights like the ever kind Michael Berryman (who followed a showing of the classic film "The Hills Have Eyes") and directors Tim Sullivan and Adam Rifkin who presented their latest horror opus "Chillerama". Head over to the website HERE to see the impressive list of guests of honor.

I've been to a my fair share of special screenings, festivals, and underground horror events in my lifetime and The Mile High Horror Film Festival is the most fun I've ever had at a gathering of the horror inclined. It's crafted with heart and an obvious love for the genre as a festival catering to the ambitious crowd with overzealous effectiveness and the films shown are only of the highest quality and best diversity available. If you are reading this, this festival is the be-all-end-all of the best in underground horror and a must attend for those in the area (or fly out here you lazy maniacs). They have guarenteed a life time of support from Blood Brothers...that's for sure.