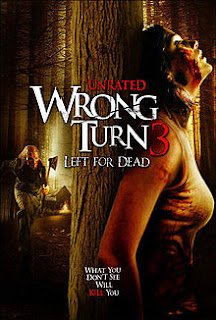 Let's hit the recap button: "Wrong Turn" was a solid enough if not cliche ridden return to your basic 80s slasher film. "Wrong Turn 2" kicked that in the ass of ridiculousness and wowed with its campy execution and perfectly outrageous story. "Wrong Turn 3" starts off seeming to follow Joe Lynch's brilliant move on "2", but then decides that it needs to be more serious and the film sinks back to levels below the original one. One were the film is worse on almost every level and rarely redeems itself with anything one looks for in a slasher.

A group of inmates and prison guards being transferred through hellbilly country on a quick and alternate route, find their bus topsy turvy and a genetically altered cannibalistic hillbilly hunting them down. Can society's worst find a way to work with each other or die on the worst night of their lives?

The opening sequence (no, not that long ass rafting sequence...the one following) had my hopes up for this film. It was horribly written, threw in gratuitous gore and nudity, and brought out the silly characters into the limelight - and it was a riot to watch. It was almost like what Joe Lynch did with "2". It grabbed the concept by the hair and drug it through its ridiculousness kicking and screaming.

After that the film tanks. I mean tanks. "Wrong Turn 3" takes what was going well in the first handful of minutes and just...leaves it to die in the woods. Our new protagonists (both cops and crooks) get too serious, the writing is still just as bad - particularly the dialogue which is pretty bottom of the barrel, and the special effects go into "made for TV" territory. It's like watching your favorite drink slowly swirl down the sink drain after you only had a sip. It's simply sad.

Really though, one expects a straight to DVD slasher about inbred/mutant hillbillies (or one hillbilly and random hillbilly kid as it would turn out for this one) to be rather bad. A few things though make "Wrong Turn 3" abysmal. It takes itself far too seriously with its characters and plot progressions and never has enough good writing or actors to sell either. It also lacks the special effects required to see it through as a good slasher. There is extensive use of lame looking CGI gore and despite some clever death sequences, most of them are ruined by poor builds and the film's inability to blend the serious plot with its ridiculous kills. It's disappointing all the way around.

This horror franchise kicked from mediocre to surprisingly awesome to deceivingly bad. "Wrong Turn 3" reminds us how bad low budget slashers can be without a creative force behind it. It rarely inspires enjoyment (sans some of the unintentional humor of its awfulness) and its poorly executed slasher elements don't even give slasher fans what they come to expect from one of these films. Let's just hope the next installment...a prequel from the same director...can redeem this franchise from this low point.