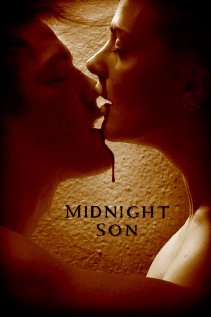 Ironically, when I was at the Mile High Horror Film Festival watching all these great independent horror films "Midnight Son" took home the audience award for best feature film. This is ironic because, in all honesty, it was probably my least favorite of the pictures I saw there. It's far from a dismal film, its a well executed and atmosphere driven vampire flick that succeeds at what it is, but fails to really push itself to certain dark areas that could have left the audience truly jaw dropped.

Jacob (Kilberg) is a young man with a few problems. As a child, a rare skin condition prevented him from being in the sun and now he eats and eats and eats, but his body rejects the nutrition. It would seem that blood is the only thing that curbs his hunger. With a new woman Mary (Parish) who suddenly comes into his complicated life, he has to make some serious decisions about what direction he must take with his life including how to handle a police investigation and some pissed off drug dealers.

In a weird cross over between "Let The Right One In" with its atmospheric tensions and the romantic story of two star crossed lovers that touches on a bit of "Twilight" here and there, "Midnight Son" is odd blend of artistic drama ventures and a new low key spin on the vampire mythos. It's done in a gritty sort of Michael Mann realism with tons of realistic lighting and minimal over the top movie moments (like bombarding soundtracks or crazy stunts) that really bring forth the best for its relatively plausible plot. The lacking focus on the super human parts of our lead's transformation into a full fledge vampire is refreshing, taking away from outrageousness and delving down into the characters and their arcs as his life and his new found love spiral further and further out of control. To its artistic merit, "Midnight Son" does deliver.

Unfortunately, the film seems to love taking its sweet time getting anywhere. The first two-thirds of the film are so subtle in its detailing and character builds that at times it just needed something to break the tension. Some sort of action or intensity to break up the monotony. Eventually, it does pay off as the last act kicks into overdrive and the slowly spiraling and building stories begin to collide with some solid pay offs (including a suddenly power hungry vampire obsessed drug dealer). It takes some time, but it gets there.

The appreciation for the artistic viewpoint on the overly saturated vampire market is nice, half the time I felt like the film wanted to go to some certain places but never did. The power crazed drug dealer for one seems quickly dispatched in the third act and many of the police investigations are brushed over for the sake of continuing our cursed hero's plight. It was certainly a solid film that earned much of the praise it has been receiving, but there are other films out there doing the same thing and doing it slightly better.

Want to catch a copy of "Midnight Son" for yourself? Pick yours up at the link below!
Posted by DarkReif
Email ThisBlogThis!Share to TwitterShare to FacebookShare to Pinterest
Labels: Drama, Horror, Mile High Horror Film Festival