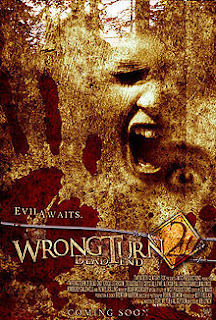 Although there were certainly elements to like about "Wrong Turn", it happened to just find itself floating in a river of 'meh' driving home a rather mediocre slasher experience. "Wrong Turn 2: Dead End" on the other hand, takes the franchise off into the right direction - that being an over the top, slightly tongue-in-cheek, and gruesome experience that earns director Joe Lynch into the "new directors to love" list at Blood Brothers and a series whose sequel actually out performs the original.

A group of haphazard and often ego maniacal reality TV contestants are driven back into the West Virginian woods for the latest 'survival TV' craze. Handled by survivalist Dale (Rollins) the group have to complete challenges and survive a fake apocalypse all the while being filmed for higher ratings. Turns out their survival fake out won't be so fake at all when a group of inbred/mutant monster people start to hunt them for food...

"Wrong Turn" was a by the numbers slasher film and interestingly enough, this sequel almost seems to poke fun at it. Although it certainly doesn't require seeing the original one to stand on its own (it does however have a few story elements that make sense better if you do), "Wrong Turn 2" takes the entire idea shoves its tongue down into the cheek and runs with it at a hundred miles an hour. The plot may be familiar, but the style and approach to what should have been a quick cash in script is hilarious and refreshing. Yeah, this film is not going to change the genre, but its a hell of a ride anyway.

It's built on cliches and views them as such. How do we get the most asinine and characteristic people in the woods? How about build it as a faux reality show with all of the various range of douche bags, heroines, jocks, and skanks in tow. How do we get more intense death sequences? How about adding in abandoned mills, traps, and Henry Rollins as a survivalist/Rambo-wannabe expert. It takes all of the cliches that we get in these sort of films, rolls them in ridiculousness, and force feeds them to the audience whether you want it or not. It's a riot to watch.

Of course, "Wrong Turn 2" isn't all spades, the acting is hit or miss (although Henry Rollins might have needed to get some sort of award for his character here) and some of the special effects are a bit lacking, but the way that Joe Lynch approaches the entire project makes for a hilariously rambunctious time for any self aware slasher fan. It's gory, funny, and completely fist pumping in its eagerness to feed the audience what they want from slashers. All to its own benefit. Impressive for a direct to DVD sequel to a mediocre slasher.