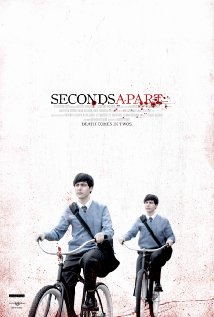 There is something to be said about the results of low expectations. Let's be honest, "Seconds Apart" didn't seem to have a lot going for it on paper. The After Dark Originals thus far have more or less been misses, the film has Orlando Jones in it (you know, "Make 7...UP YOURS!" guy), and it's about twins with the power to control people's minds. There's not a whole lot that would indicate a solid independent film. Ironically, it is. Surprisingly solid acting, a story that rise above the gimmick, and a well structured storytelling process makes "Seconds Apart" the best After Dark Original thus far.

Seth and Jonah (Entin and Entin, respectively) are two very strange twins. They are almost identical in every way and they creep their classmates out. It's a legit felling since the two have some very creepy abilities like telekinesis and telepathy and they get their kicks by making their fellow students do creepy things, record them, and then wipe their minds. When a detective (Jones) begins to suspect the twins in a strange suicide case, he finds himself spiraling down into a long tunnel of deceit, danger, and creepy twins.

"Seconds Apart" does a surprisingly effective job at rising above its gimmicky premise. Granted, it has some moments that fall prey to its concept and its oddities, but this film tries its ass off not to feel that way.
The writing is clever enough to not treat itself like a made for SyFy original film (particularly with its rather intriguing twist ending that caught me off guard...even if it doesn't really make sense) and even though it runs into a few cliches along the way like its tragedy stricken detective, it pushes for the sky and it pays off.

This is also helped by the higher end quality of the film. It looks like a theatrically released horror film. It's got great production values with some solid enough special effects and the acting is surprisingly well done considering its real life twins who own their roles and Orlando Jones doing his best to sell a serious detective character. The directing is also solid enough to sell the concept with vigor for some of the higher intensity moments. The film all around succeeds at selling the story.

This is not a film for everyone as the concept just might run a little illogical, but if you let the film sweep you for the ride, it's a fun trip with surprisingly good execution. It has its flaws, but it's still the best After Dark Original I've see thus far.