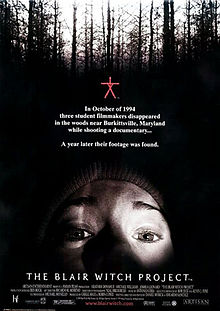 Since it would seem lately I have been kicking it with the old 'found footage' horror, I decided to throw myself back to where it suddenly became a popular gimmick - "The Blair Witch Project". Although one has to admit that the film changed the way horror would be viewed in the coming years and that directors Myrick and Sanchez went for the throat in realism for it, its hard for me not to criticize the film for being too subtle and too lackluster with its pacing. Not to mention, dare I say it...BORING.

Three students on their way to make a documentary about a local legend The Blair Witch find themselves in a bit of a bind when their brief shoot in the woods where the supposed ghost lives elongates itself unexpectedly. Random and often sinister occurrences keep them in the forest and things begin to spiral out of control.

What is brilliant about "The Blair Witch Project" was how effectively Myrick and Sanchez make this film feel. Actors who ably handle the improvised script, the look of the film and its scratchy sound and poorly lit atmosphere, and of course the subtlety of the reoccurring phenomenon that never feels the need to explain itself to the audience. If you miss the first half hour, you will be completely lost to the relevancy of many of the details of the film. In a way, this is insanely respectable as the filmmakers simply destroy the concept in execution.

These elements that make it seem so real (and perhaps so scary to some) are also the same elements that hinder the film from truly going to the places it could have gone. The little things are huge things to the characters - like piles of rocks and sticks hashed together - seem rather mundane and boring for those how haven't bought into the "its real!" gimmick. It's simply not scary, no matter how well the actors cut it or the atmosphere lays it on. That builds to the end of the film, so that the pacing feels like its going at a snail's pace for a majority of the film. When they do suddenly find something more extensive than rocks and sticks (the house sequence at the end), that's when it gets exciting and throws in a nice twisted detail to cap it all off. Until the last ten minutes though, its almost too real for its own good.

I have massive respect for "The Blair Witch Project" and how its clever idea and execution (including a fascinating internet viral campaign that was the first of its kind) changed the way horror could be done, but generally speaking, the film rarely scares and chances the viewer losing interest if they aren't hooked into its realism. A film that I highly recommend for those privy to inventive film-making or pieces of film that change the landscape, but beyond that its mostly hype.