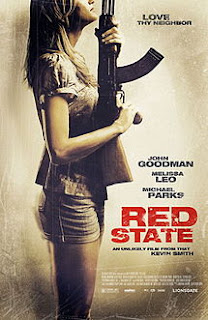 With a floundering career as a director/writer in comedy with the likes of "Zack and Miri" trying too damn hard and "Cop Out" not trying hard enough, Kevin Smith decided to jump ship and head over to a genre where the bang for his buck is probably more worth it. Horror. Thusly we are given "Red State", a rather odd horror film that rarely feels like horror and tends to over preach against both state and church. It certainly has its moments, the black humor is quite fitting and its wicked quick pacing works, but overall "Red State" disappoints. Not unlike the last handful of Kevin Smith films.

Three teenage boys are tricked by the promise of quick sex into becoming hostages by an over zealous church oriented and generally hateful family whose anger towards the unGodly is only matched by the stockade of firepower held in the compound. When the government gets involved via the shaky hand of ATF Agent Keenan (Goodman), all hell might break loose in the name of God.

What's so frustrating about "Red State" (and for many independent horror films in general) is that the concept and potential for this film is quite intriguing. A religious group who abducts kids for their sins against God and the investigation into it. It's like an even more controversial sounding version of "Hostel". For both good and bad though, this film was directed and written by Kevin Smith.

This means that a) some of the oddly timed humor will work and there will be a fairly solid style to the film. It also means that b) its never going to shut up. Talk, talk, talk. This film gets so damn preachy about government, guns, and God that it reminded me why I quit following Kevin Smith on Twitter. We get it. Don't beat our skulls in with your concepts. Smith certainly piles it on and rarely leaves anything for the audience to think about without it being shouted. Luckily, the acting is quite impressive (including John Goodman and our villain Michael Parks) and can sell most of the main parts. The supporting cast is wishy washy but that's due to....

...To the rather ridiculous plot progression. The story is interesting. The characters are too, but the film never really feels like a horror movie. It starts off in a rather cliche horror fashion with isolated kids being threatened by death at the hands of nutty people. Then it takes a turn, ignores the kids, and goes straight into a Waco like scenario leaving the audience with really no one to root for or any care to what actually happens in this awkward circumstances. It's like two different films sort of glued together. Awkwardly at that.

The film does end on a rather high note, blending Smith's penchant for dark humor with a clever spin, but by that time I had already checked out due to the rather preachy nature of the dialogue and the choppy script progression. Smith's directing is solid and modern and many of the performances are much better than they should have, but the film's foundations are too flawed to really make it work like it should have. Respect goes to Smith for the rather intense leap of style, but the film isn't what it could have been.