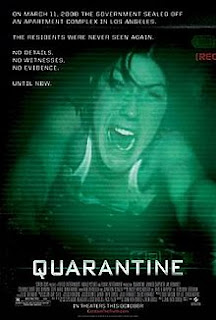 Brace yourself, just when you thought it was safe to praise "[Rec]" as one of the best horror films of the last decade the Hollywood remake machine pumps out their own version (within a year, mind you) in the form of "Quarantine". A fairly efficient remake, it does happen to be damn close to being shot for shot in similarity with only a few new scenes and bit of dialogue added. Just not as good as the original in any aspect. It's close, but fans of "[Rec]" will be more than happy to skip this and rewatch the superior Spanish film.

Angela (Carpenter) and her cameraman are up late filming a feel good story about the late night firemen that work so hard in city. When the call comes in to help an old lady in distress at an older apartment complex, she tags along to film the highlight of their night with the fire department. Unfortunately, the routine call ends up getting them all quarantined under mysterious circumstances with a rabid virus that seems to be turning the people in the building into ravenous zombies.

For those of you new to either film, "Quarantine" pumps up the zombie genre with some nice intensity. The 'found footage' handheld camera throws the viewer straight into the panic. As with the original, this version ably supports this idea by replicating the isolation element of this run-down and often far too small apartment complex and pummeling it with disorienting camera work that leaves one unsure of where things are and how it will play out. The zombies/infected (any difference at this point with modern films like this?) are downright vicious and fast and it just adds onto the rather dense atmosphere of the film. These two elements are well executed and surely will have viewers leaping from their seats at many moments.

To its fault, "Quarantine" does have a hit or miss cast. Although Jennifer Carpenter works her leading lady role to her best, its hard to shake the sister character she plays in "Dexter" form my notions of her and the supporting cast sports quite a few recognizable faces that sort of ruins the 'in the moment' experience even if someone does a decent enough job at what needs to be accomplished. In a way, the cast just isn't strong enough to make me forget that its actors.

For those unfamiliar with either film, "Quarantine" is an efficient film that ably blends the zombie outbreak intensity with great atmosphere and the chaotic style of the handheld camera. It's rather style driven though with its hit or miss cast/acting and for those who have seen "[Rec]" it just sort of falls quite short of the brilliance of that independent modern horror classic. My suggestion goes towards the original, even though this film does as admirable job at replicating it's successes. Solid, but not as great as the original.

BONUS PRAISE: The few scenes they added really don't do much more than pad the general plot with a few more details, but the addition of the infected dog was quite a clever twist. Not to mention it gives us a great moment of when the survivors have to get back on the elevator with the vicious canine. IT'S HAMMER TIME.