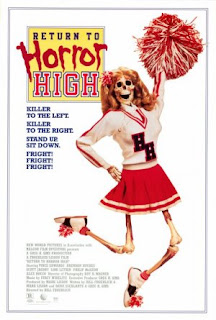 From the title one would think this is a sequel to the 1974 horror film "Horror High." The Internet Movie Database lists this slasher as a sequel to that drive-in "classic" but I am very skeptical. First of all the plot has absolutely NO connection. The first film was about a Nerd that drank a potion he concocted turning himself into a hairy "Hyde" like figure to kill the people who had done him wrong. "Return to Horror High" is tongue-in-cheek slasher spoof that pokes fun at the "stalk and slash" subgenre. To me the "Return" in the title is referring to the films plot about a movie crew returning to high school where murders occurred in 1982. The ending to this film also puts a kibosh on any connection. I can't find any other sources on the subject to prove that it is or that it isn't a follow-up. Since this film is completely different than the film "Horror High" one should go into this film with a fresh new perspective.

I touched on the plot before but the film begins with a group of cops (one being Maureen McCormick of Brady Bunch fame) on site of a mass murder where a killer butchered a movie crew who was filming at a high school where mass murders occurred five years before. The films plot diverges between flashbacks to the movie crew filming the movie to flashbacks of the original murders taking place. This is where the plot flow gets really messy.

The real problem with this film is it has plot lines going every direction and loses the audience in the process. The film begins with cops on site investigating the murder of our film crew, then the film flashbacks to the crew actually making the film, then the film flashbacks to when the first set of murders take place, but wait! It was just the movie crew filming a scene for the film! Later the film flashbacks to the original murders BUT it's an actual flashback this time and not a movie scene. Then the film flashes forward, back, forward and there is even a dream sequence shoved in there to royally fuck with the viewers. One almost needs a pen and paper to jot down notes to get this plotline straight! When I first saw this slasher in high school I remember not knowing what the hell was going on. Watching it again as an adult one really has to pay attention to know which plot line goes where.

What I do like about this film is that it spoofs the slasher genre, and low budget filmmaking in general, without being a full fledged comedy like "Scary Movie." It spoofs and at the same time it's an actual slasher film with enough blood and carnage to please gorehounds. I also like the portrayal of some of the characters, the highlight is Alex Rocco as the film producer as the just hams it up wonderfully as he screams "more blood" and "more nudity."

Since the films plotline takes so many god damn detours we never really know who are the main characters we are supposed to follow until over half-way through the damn film. Since the film jumps around so much we don't get to know our leads well and by the end after plot twist after plot twist I found myself not giving two shits.

"Return to Horror High" could have worked wonderfully if the damn plotline could have been tightened up better with writing and editing. Viewers are just destined to get lost in the timeline jumping mixed with "fooled ya" flashbacks. Despite those problems the characters are colorful, the violence is bloody, and it has a nice humor streak poking fun at the slasher craze. It's definitely worth a look for slasher fanatics but others need not apply. Keep an eye out for a small early role for George Clooney.

Written By Eric Reifschneider
Posted by Cronosmantas at 8:05 PM