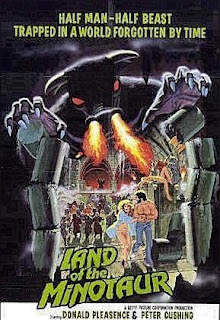 The Minotaur has always been a favorite of mine from Greek mythology. I always wanted to see a movie about the Minotaur as I thumbed through books on the subject. The idea of a half man, half bull monster chasing people through a labyrinth sounded like a great suspenseful idea. From the title of this film and the poster artwork I expected this film to be about... well... a Minotaur chasing and killing people. Again distributors lie to get more people to buy tickets. Well "lie" might be too harsh of a word. Perhaps "mislead" fits better as there is a minotaur in the film, it just happens to be only a stone statue that is worshiped by Satanists. "Land of the Minotaur" is actually just another 70's satanic horror film that was originally made as "The Devil's Men" but retitled in America to give audiences the wrong impression on exactly what the film was about.

What we have is a group of archeologist hippies meet up with a priest (Donald Pleasance) in order to go study the ruins of a local castle in Greece. The kicker is that the castle is the home of a satanic cult who worships a Minotaur statue and soon our three hippies disappear. A girlfriend of one of the missing hippies arrives on site and our priest calls a detective friend from New York to come and press the local Baron (Peter Cushing) to see where the missing hippies are.

What I don't get is why would Satanists worship a statue of a Minotaur? The Minotaur in Greek mythology was never a "satanic" figure and it is none of the writings of Christian history. Very odd indeed. Our Minotaur statue does oddly have the ability to talk with no mouth and blow demonic flames through its nostrils. Ouuuuu....scary!

The main attraction of this film to horror film fans is that it has two seasoned actors of the genre with Donald Pleasance and Peter Cushing. Their appearance does aid the film but they seem underused and the dialogue is definitely not up to their usual caliber. It's almost humorous to hear Pleasance say such lines as "he was on the edge of death but it takes more than the force of an automobile to destroy them." The character's also have odd relationships. How do Pleasance and the detective from New York know each other? Despite Pleasance calling on him for help, he sure doesn't seem to like him too much and always criticizes his driving. Our detective even saves Pleasance's life by pushing him out of the way of a speeding car and he has the gall to say "Did you have to push me so hard!?" Some thanks! The rest of the cast is adequate and the two blonds in the cast are nice eye candy as they wear shorts so tight and short that they look like denim underwear.

With a cast like Donald Pleasance and Peter Cushing this film should have been far better than it is and the film feels like it's beneath their talents. Satanic cult horror films in the seventies were a dime a dozen and this is definitely not one of the best yet it at the same time it lacks the cheesy goodness of such trashy efforts like "The Devil's Rain." The film might be of minor interest for fans of 70s horror cinema or fans of Pleasance and Cushing otherwise horror fanatics are better off checking out Hammer's "The Devil Rides Out."

Written By Eric Reifschneider
Posted by Cronosmantas at 6:10 PM