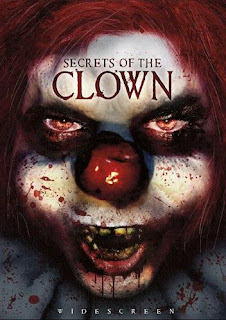 Technology has really hurt the quality of horror films being released today. The reason being is that now relatively anybody can make a film thanks to cheap digital cameras and editing programs that can be used on personal computers. Since movies can be completely done at the convenience in anyone's home, a lot of people who have absolutely no right making a movie are giving it a shot. Due to this the video store shelves are loaded with absolute crap from people who took their cheap digital cameras and banged out a film in a few days and then somehow finagle DVD companies (Lionsgate is the biggest culprit) to release their shit films onto the unsuspecting market. This is the reason I am so damn careful when it comes to renting or buying modern direct-to-video horror films today as it seems 90% of them are this homemade crap. "Secrets of the Clown" is one of these such "films".

"Secrets of the Clown" is also another entry into an ever-growing subgenre of "Clownsploitation" horror. The problem is for every "Killer Klowns from Outer Space", "Clownhouse" and "It" there are 100 films like this homemade piece of junk. Since I hate modern home-made horror films and clown horror excluding the one's I mentioned before, then why did I sit down and waste my time with "Secrets of the Clown?" Well the reason I watched it is because I own it. Hold on! Let me explain. I bought a quadruple feature for the 1983 slasher classic "Curtains"."Secrets of the Clown" was one of the of the three other films so technically I got the damn thing for free. Having some free time due to a blizzard snowing me in from work, I decided to watch this hunk of shit to see how bad it really was. Nothing could prepare me for the absolute horror I would experience by having this crude being channeled through my DVD player to my television.

The "plot" opens with a murder of two people by someone that seems to be dressed as a clown (though the killer is mostly kept off screen). The next door neighbors hear of the occurrence and the killer makes their way over and stabs the best friend of our main character. Now the film takes a supernatural turn when the friend that got diced seems to haunt the house. There is also some mumbo jumbo of about our main character's girlfriend having a possessed clown doll but all these crummy story arcs never come together properly.

For a low budget horror film to work, it needs to have an interesting story, flashy directing and/or creative gore. This novice effort lacks on all accounts. The story is poorly written and uninvolving and the performances are below porn level. Seriously this is some of the worst acting I have ever seen! The camerawork is amateurish and the whole film has a cheap digital camera look to it. The sound is even poorly mixed and it sounds like loud dubbing. The films greatest sin however is that it doesn't live up to its title and people expecting a slasher dressed as a clown marching around and butchering people throughout the entire picture are going to be sorely disappointed.

If this were a high school film made for an English class then it might be "good." For a film given a wide release on the direct-to-video market in which people have to PAY to see then this absolute dog shit. The secret of this clown deserves to stay a secret and the DVD case is destined to stay on the video store shelf collecting dust and having its cover artwork slowly faded by the glaring sun. The simple fact that this crap is packaged in the same DVD set as "Curtains" royally pisses me off.

Written By Eric Reifschneider
Posted by Cronosmantas at 12:02 PM