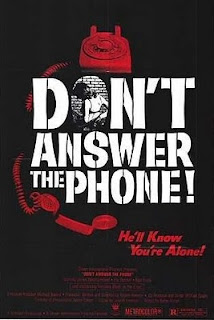 A psychotic Vietnam Vet (Nicholas Worth) roams around the sunset strip in L.A. targeting beautiful young women to strangle and then rape after death. In the process of his rampage, he dodges two homicide detectives while making obscene phone calls to a psychologist who runs a radio talk show.

Like I mentioned "Don't Answer the Phone" was better than I originally expected as novice director Robert Hammer is actually able to bring out a creepy and deranged performance from underrated character actor Nicholas Worth. Hammer also treats the material with some restrainment which might disappoint some fans of these genre movies. Films of this type are usually full of sex, nudity, violence and gore and Hammer does fill the film with nudity (every victim is strangled topless) and disturbingly realistic violence but he doesn't go the extra mile to show sex and gore. His restraint actually brought a little more "class" to the picture but it will no doubt disappoint some fans of these degenerate films.

"Don't Answer the Phone" though not a real good picture is actually better then one might expect and might be worth a hunt for fans of grindhouse style horror. Horror fanatics expecting this to be another graphic picture in the nature of William Lustig's "Maniac" might come out a little disappointed.

If you do happen to want to purchase this film, make sure to get the any version from BCI Eclipse or Mill Creek Entertainment. These releases have the film completely uncut. An earlier version released from Rhino Home Video is the TV edit which cuts out all the violence and nudity, hurting the shocking nature of the film.

Written By Eric Reifschneider
Posted by Cronosmantas at 12:51 PM