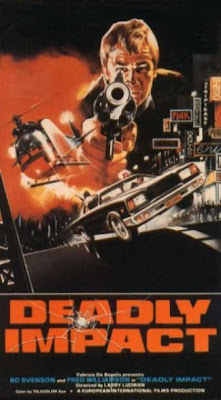 The Italian poliziotteschi subgenre of action films pretty much died out by 1980 but a few did surface throughout the decade but went mostly unseen. Why are most of these films from the 80's unseen? Well it could be for the fact that most of them were pure shit and "Deadly Impact" is just that, 100% shit. The 1983 release of the Dirty Harry film "Sudden Impact" allowed this Italian cheapo rip-off to get made, I mean look at the poster artwork. Not only is the title lifted from "Sudden Impact" but the font for the title and the shattered effect of a bullet traveling through the artwork is amazingly similar to the afore mentioned "Dirty Harry" movie. I usually love cheap 80's Italian rip-offs so what gives here? Fuck it even stars genre greats Bo Svenson and Fred Williamson so how could the filmmakers fuck up so royally? Well strap on your 44 magnum and let's take a shot to find out why.

"Deadly Impact" takes place in Las Vegas and begins with a hot shot computer whiz that is able to hack into casino computer systems to know what slot machines are close to paying out. Him and his girlfriend end up getting caught and killed by a couple of thugs. Hot shot cop Bo Svenson and his Vietnam helicopter pilot buddy Fred Williamson are in desperate need for cash so they team up to track the goons down to and perhaps find some money.

Bo Svenson tries to give his best Dirty Harry impersonation but he is just fucking terrible not aided by the connect-the-dot script. Not even Fred Williamson is able to say this shit dialogue with any amount of conviction. The characters are so poorly developed that a blade of grass would have more personality than these two "heroes" do.

The worst part is the sloppy directing by Fabrizio De Angelis. Angelis was actually a lucrative Italian producer involved with many Lucio Fulci and Enzo G. Castellari pictures. Not content on being the money man behind the scenes he decided to dive into directing as well giving us a number of poorly shot action films throughout the 80's (including the "Thunder Warrior" trilogy). The film just has a boring, flat look to it as if it was made-for-TV. Hell he even ends the film with a "Blue CHIPS" style freeze frame. Italian movies aren't supposed to look like they were made for television! Fabrizio should have hired, you know, a TRAINED person for the directing job. Even Castellari was able to give his trashy 80's films some great camera work! Not even a few good chase sequences help ease the pain of the director's boring style.

The score is another bitch I have about this film. Italian films are usually known for amazing if somewhat bizarre scores. This is the country that gave us Goblin, Ennio Morricone, Fabio Frizzi and Riz Ortolani for Christ sake! The music here seems like stock TV movie themes....uggg. The "suspenseful" helicopter chase at the end has some "happy go lucky" shit playing in the background completely ruining any suspense the sequence was building. Can you imagine the chase scene from "The French Connection" with the Golden Girls theme "Thank You for Being a Friend" playing in the background? FUCK NO!

A film reuniting "Inglorious Bastards" stars Bo Svenson and Fred Williamson should have been much better than this. Don't get me wrong as I wasn't expecting a "good" movie going into "Deadly Impact" but with B-movie legends like these guys I was at least expecting a trashy good time along the same lines as Castillari's "Light Blast" or his "Bronx Warriors" duology. Where the hell is Enzo G. Castellari when you need him?! I can honestly say this is the worst poliziotteschi film I have seen even beating out the lackluster "Double Game." Time to put on "Violent Naples" or "The Big Racket" to erase this Italian turd from my memory.

NOTE: The DVD I have of "Deadly Impact" came in a quadruple feature with three other obscure action films and the transfer is taken from a VHS source. I have no problem with VHS transfers as that is the only to see a lot of these obscure films but the VHS they sourced the film from was rather beat up with annoying lines popping up throughout most of the film, especially towards the end. I can't bitch too much about that because I doubt I will ever watch this B-movie failure again.

Written By Eric Reifschneider
Posted by Cronosmantas at 7:11 PM