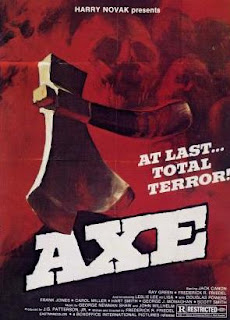 The simply titled "Axe" (also released as "Lisa, Lisa" and "The Virgin Slaughter") is one of the lesser seen films to make it on the now famous Video Nasties list in Great Britain. Now you don't need to think too hard when you 'axe' yourself the question "why is it lesser known?" Well it's for the simple reason that it is easily eclipsed by genre monsters such as "The Texas Chainsaw Massacre," "The Last House on the Left", "I Spit on Your Grave" and the likes. Does it mean it's not worth seeking at out? Well let's bury the hatchet and find out...

"Axe", typical with 70's exploitation horror, has a very simplistic plot yet at the same time having a realistic gritty feel to it. The film kicks off with a trio of hitmen killing a man. They then go on a "rampage" (though I use that word very loosely) as they later humiliate a convenience store clerk. On the run from the cops, they invade and take refuge in a remote farmhouse that is occupied by a young woman and her handicapped grandfather. The kicker is that she is completely psychotic and the hitmen find out she enjoys murder and mayhem even more than they and in turn takes pleasure in killing and maiming them in various bloody ways.

It's easy to see that the film has an extremely low budget due to the simplistic directing style of Frederick R. Friedel (who also played one of the thugs) and non-existent production values. The limited style and second rate acting gives the film a great grindhouse feel that will appeal to fans of obscure exploitation trash and this lack of style actual benefits the gritty nature of the film.

The aspect of the film I feel could have been greatly expanded on is character development and motivations for our psychopathic figures. The backstory of our goons is very limited and doesn't delve much into what fueled their 'rampage.' Also our psychotic farm girl Lisa has no backstory. Why is she so living with her grandfather and why does she have a knack for killing? All we get is her enjoying cutting chicken's heads off, staring off into space, and oddly enough feeding her grandfather raw eggs (?!?!). Why his her grandfather in a catatonic state? Nothing is thoroughly explained leaving viewers to fill in the gaps.

The film also only clocks in at a measly 68 minutes. That's barely over an hour! Our director could have easily gave us 10 more minutes of character development and motivations to make the film closer to full length. Hey when I pay good money for a 70's exploitation horror film, I want a full length movie!

For the time the killings were bloody and violent (the straight razor sequence on the back of the neck during the attempted rape sequence is especially disturbing) but the blood looks like paint so gorehounds might be a little disappointed by the low grade effects. Hey, fake looking blood was a product of the time and budget so you can't judge it on that aspect alone.

"Axe" for the most part is a dark, somewhat morbid 70's exploitation horror film that's worth checking out for fans of grindhouse style rarities even if the limited plot leaves the viewer craving more flavor out of their exploitation pie. Is it as good as the films I mentioned above? Oh hell no but the film is worth a look if you find it worthwhile to put money down on a film that barely clocks in at over an hour long.

Written By Eric Reifschneider
Posted by Cronosmantas at 11:06 PM