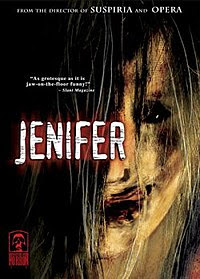 A cop, Frank (Weber), finds himself in an odd situation when he stumbles upon a man threatening to kill a women with a clever in an abandoned area. After killing the man, he finds that the woman has a massively disfigured face (almost monstrous with its teeth and large completely black eyes) and is perhaps mentally challenged. He soon becomes obsessed with keeping her safe despite the face that she begins to start killing animals and people around him. Now Frank has to decide what's right: protecting this woman or turning her in.

Although Argento is a massive cult director in the horror genre with talent that oozes out of his visual attributes, "Jenifer" comes off as less than one could have hoped. The execution of the episode is top notch, with Argento's style highlighting it (including his use of creepy scoring) and some great acting to go on par with it. The story and plot is the odd part of this episode. Of course, in very Argento style, the episode can be very disturbing at times as it ably blends eroticism and violence using its nudity and sexual moments to be grotesque rather than a symbol of love. This makes the episode rather uncomfortable and memorable as it sets itself aside from the rest. Unfortunately, the plot is rather predictable and the character arcs too illogical to be as solid as it could have been. Too many questions left unanswered (for example, why the cut seems so relevant to her grip on the main character) and it just hinders the experience that this episode could have struck. This is a very good episode with its execution by on and off screen parties being very well crafted, but its foundation is a little rocky to be building on and it makes it rather hit or miss. Good, but not great.

Written By Matt Reifschneider
Posted by DarkReif at 11:13 AM