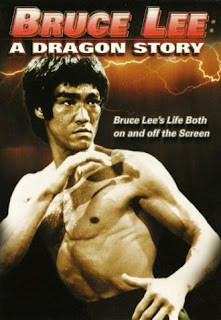 Oh boy what can I say on this Bruceploitation turd. For one thing this is probably the worst Bruceploitation film I have ever seen and considering the subgenre is 99.9% trash that is quite a statement. This "biopic" picture of Bruce Lee (starring Bruce Li in the title role) is both an insult to the Bruce Lee name and to fans of trashy martial arts films. Yes it's that fucking bad.

Being a biopic the film is based on "true" life events of the amazing martial artist Bruce Lee on how he rose to fame on TV and films, married an American women, cheated with a famous Chinese actress which then lead to his untimely death.

Like most Bruce Lee biopics which claim to be based on true facts, this one is no different and is completely inaccurate. Sure they get the basics right but the filmmakers take too much leeway with the material in order to make a more interesting and "action packed" movie. Some of these "freely adapted" scenes are quite unintentionally funny. For example is it is amazing how many groups of warriors challenge Bruce Lee throughout the film. The strangest is when Li and his wife are in America and suddenly a group of three samurai come up and after Li kicks the crap out of them he retorts "this is a awful place to live." Sure... that's exactly how it happened...sheesh.

The acting is dreadful and the filmmaking is absolutely the lowest common denominator. Great filmmaking is never an ingredient in Bruceploitation films but even for a Bruceploitation film this is bad. The directing is dilapidated and the editing seems to be done by a psychotic samurai warrior wheedling his blade around. I lost count on how many jarring edits that are so rough they seem to knock the viewer out.

The dialogue is cringe worthy and it matches the emotionless dubbing. The dubbing for director Wei Lo is by far the worst as he says such makeshift lines as "So What! Does that mean I'm not still a man!" The dubbing for Bruce Li is so drab that the character might as well been dubbed by Ben Stein.

I'm not a fan of biopic Bruceploitation films to begin with and the only one I've seen worth while is Bruce Lee: The Man, The Myth. The rest are pretty much crap and this very well might be the worst biopic, maybe even the worst Bruceploitation film ever made. There are much more enjoyable films in this interesting subgenre so my advice is to skip it.

Bonus Rant: There is a love song played on the soundtrack during emotional scenes between Bruce Li and his mistress and the filmmakers decided to subtitle the lyrics of the song in both Chinese characters and in English. Thanks to the films picture ratio being fucked up (yes again! This is the fifth DVD I've seen of a Bruceploitation film where the picture ratio is fucked up!) the subtitles end up being cut off on both ends. Damn you DVD companies and giving such trash movies trashy transfers!

Written By Eric Reifschneider
Posted by Cronosmantas at 10:31 AM