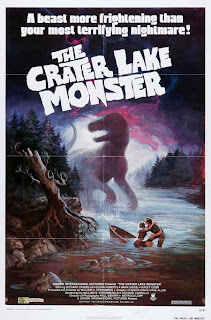 One quick glance at the title and one would think this was one of those cheesy black & white monster movies from the 1950s. Well it's 2 out of those 4. It's cheesy and a monster movie but it's in color and from the 1970s. "Crater Lake Monster" is a 1977 picture actually intended to be a nice throwback to the monster films of the 50s except it fails on one major aspect: it just plain and simple sucks ass.

Some paleontologists uncover a hidden cave which contains drawings of humans fighting a dinosaur (a plesiosaur, I know that thanks to my brother who wanted to be a paleontologist as a kid). Soon after a meteor comes crashing down into the nearby lake and the heat warms the water hatching a long doormat dinosaur egg. Along with our big dinosaur comes a big appetite and he starts munching on local people and livestock leaving the sheriff dumbfounded.

I know low budget horror films can have some pretty horrific acting but sometimes it adds to the charm. The acting in this film is so bad though that it actually made me sick to my stomach. Richard Cardella as our lead sheriff is awful and it comes to no surprise this is his one and only acting credit. No doubt he was a sheriff in real life near the lake they shot this turkey at.

Along with bad acting comes bad characters and these characters are pretty wretched. The worst characters are in the form of two bumbling rednecks who try to provide the film with "comic relief." I found myself laughing not because they were funny, but for the fact the director actually intended their characters to be funny. Just watch in awe as they fight on how to spell the word "bait" and how they get scared of a fallen tree. These guys are lame even compared to the two bumbling cops in "Halloween 5" and those guys were even accompanied by clown noises while they were on screen!

The most "what the fuck" moment as the filmmakers add a weird sequence where man shoots a convenience store clerk and a shopper only to take one bottle of liquor. I mean what the hell was that! It fucking comes out of nowhere and to top it off he kills two people for one measly bottle of liquor. If you're going to go to the trouble of killing people wouldn't you want make it worth while, like also taking the money out of the register or hell maybe even taking 2 bottles of liquor. This bizarre sequence has our robber getting chased by our sheriff only to become dino food. Again what a bizarre sequence to introduce a character that's only purpose is to be a dino snack.

The special effects range from good to shit. The good portion of the effects are thanks to the late great David Allen for providing nice stop motion. I'm a sucker for stop motion effects and Allan was amazing at providing these cool on screen images for tons of low budget films up until his death in the late 1990s. The rest of the effects look like they come directly from a local guys wood shop as the close up shots of the monster is nothing more than a big wood and plastic head floating around.

Instead of being a tribute to the monster films of the past, "Crater Lake Monster" comes off more as an insult ensuring it would be William R. Stromberg one and only film credit. The only aspect to recommend about this feature is the nifty stop motion effects as the bad acting, bad directing, bad comic relief and the uninspired climax makes this B-movie a chore to sit through. Alcohol may be needed.

Written By Eric Reifschneider
Posted by Cronosmantas at 7:21 AM