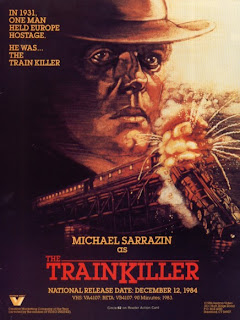 I enjoy purchasing public domain DVD sets every once-in-a-blue moon as I can find some really obscure films that are of some interest. Most of the time the films are passable and even bad but I do happen upon some actual decent films that have fallen from the public memory years upon years ago. The interestingly titled "The Train Killer" is one of those very films and it shines a little brighter than most of the drivel included in such collections.

The film appealed to me as I have a history degree and the film is based on the horrific true events of a man named Matuska Szilveszter, also known as "The Train Killer." In 1931 following his tour of duty in World War I, Szilveszter terrorized Hungary by exploding and derailing trains, killing numerous innocent civilians in the process. His intent was never clear: was it to help spread communism or was he just simply insane. What I love about this story is that it is a obscure story here in America. I never once learned about "The Train Killer" in any of my numerous history courses so I ate this story up hungrily even going and doing additional research on the subject.

Despite being interested in the true events the film is based on, it still falls victim to many of the trappings of numerous other historical based films. The first problem is the pacing as the film never really gathers steam (sorry for the pun) and the whole film moves at a medium pace at best. The second problem is director Sándor Simó doesn't give the film much visual style and his approach is pretty standard focusing more on the plot instead of visuals. I prefer some great visualization directing mixed in with a strong plot so for that I have to mark down the film a few points. Another problem I have is how our 'train killer' is written. Though Michael Sarrazin is good in the role, the character is written so we don't get much incite to his madness or his background. I understand his purposes for the terrorist attacks was unclear but we see no decention to his character and I wish his character was a little flesh out by giving us more backstory to help the audience come to their own conclusion on what fueled his hatred. Some of the other characters are also oddly written to make illogical decisions. For example our 'train killer' rides down a women on a bicycle because she accidentally took his bag and then flips out on her. Later she sneaks up on him and takes his picture and he flakes out again yet she agree to meet him for a drink and dance, and ends up sleeping with him. What?! This guy was a total dick to her on the two occasions she met him and she still beds him?! A guy gets laid by a women he's a total jackass too... what gives?

For a Hungarian film the dubbing is surprisingly well done and the acting is rather good for the most part. The special effects are also wonderful and the climatic train bombing fooled me it was a real train and I had to rewind the film several times to see that it was actually a model. These are some of the best model effects I have ever seen, hands down, and it adds to the films realism.

Fans of early 1900's European history will want to hunt this film down as it gives us Americans an interesting slice of history that we never learned about here in the States. As is though the restrained directing from a visual standpoint makes this film have rather low replay value but it's well worth a onetime watch. The original Vestron video release is obtainable used or you can find it in numerous public domain DVD sets as a VHS transfer.