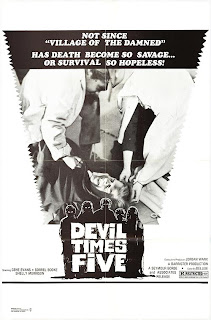 Children that kill is nothing new in the horror genre. We had "Village of the Damned", "Children of the Damned", "The Bad Seed" and even "The Omen". Most of these films had an alien or supernatural slant to their evil ways. Despite the title, "Devil Times Five" (originally released with the less eye catching title "Peopletoys") has our five children being just plain evil without the aid of aliens or the supernatural. These children are just nasty psychotic killers through and through and it really adds to the creep factor of the film.

We are introduced to a group of rich, sleazy and pompous group of adults that head out to spend a vacation in a snowbound lodge. Not far from the lodge, a van carrying psychopathic children crashes. The children survive and make their way to the lodge. These devious little bastards look all innocent at first but soon start to kill our unlikeable adults in sadistic, gory ways including axes and other penetrating weapons. The most unique kill has to be a sequence where one of our children dump a number of man-eating piranha into a bathtub.

Our children are definitely the highlight as all the actors do well and it's just damn creepy to see children enjoy cold blooded murder so much (look for teen idol Leif Garrett in one of his first roles). Unlike the children, the adult characters leave a lot to be desired. Many of our adult actors are less then stellar and there is not one of the adult characters that's likable. They are all nasty individuals and in turn the audience wants to see them all die. Even the presence of one likable adult character would have helped the film tenfold.

"Devil Times Five" had a very turmoiled production as original director Sean MacGregor was fired only a few weeks into the project. Director David Sheldon was brought in to finish the film and the final result shows the troubles that occurred on the set as it really is the result of two different visions. The first problem is that halfway through the film, the interior of the lodge drastically changes due to the replacement director shooting in different locations. Leif Garrett's hair also changes as during the director transition the young actor had to get a haircut for another job and during the second half of the film he wears an unconvincing wig. The director (which one, I'm not sure) also made some awkward stylistic choices. The first is towards the beginning of the film, they obtrusively speed up the van crash. Another scene has the director film an entire murder sequence in slow motion with an awkward color drawing out the scene to what seems like 10 minutes long!

With better adult characters, a tighter pace and some stability behind the camera, "Devil Times Five" could have been a classic horror film celebrated by the masses. The concept is creepy and the kills are unique. As it is "Devil Times Five" is only a somewhat decent obscure find for horror fanatics but I still find it worth the price of admission. The film was also released on DVD by Code Red in a double feature with "Mark of the Witch".