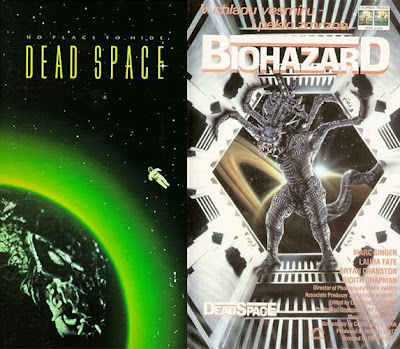 In the coldness of space... even Hell freezes over - "Dead Space" Tagline

Why is that bad movies always have the best taglines? Look at it. Isn't it thing of beauty? Sadly "Dead Space" actually lives more up to its title as one really has to have 'dead space' between their ears to love this remake. What? Did I just type the word 'remake'? "Dead Space" is a remake? No way! Yes "Dead Space" (also released in Europe as "Biohazard") is a 1990 remake of the 1982 film "Forbidden World." Out of all the films you could think of that would warrant a remake, I guarantee "Forbidden World" was not one of the films thought of. The DVD box artwork claims this is a "loose remake." Loose? Bullshit! This film is so much like "Forbidden World" that they might as well ripped off the title page of the script to "Forbidden World" and replaced it with a title page that read "Dead Space." That's how close these two films are! Don't believe me? Watch them back-to-back and they are almost the exact same film, just this one is shittier. Since they are so much alike get ready for numerous comparisons to "that other film."

Like "Forbidden World", our "Alien" rip-off plot has a space mercenary (Marc Singer) and his robot sidekick respond to a distress call from a scientific research station. After blowing up some spaceships of some unknown enemy (utilizing stock footage from "Battle Beyond the Stars", just like "that other film"...hmmmm) he arrives and discovers that the team has had a biological creation bust loose and has started killing off the crew one by one and it's up to him to destroy it.

Since the plot is the same as "that other film", the filmmakers wisely decided to give this film a different look. "Forbidden World" had warm colors with lots of reds and oranges. "Dead Space " has the opposite with cool and sterile colors, meaning lots of whites, blacks and blues. I'll commend them there as at least they attempted to distance this picture from "that other film" in 'look' aspect. The scientists here also look and act more like real scientists whereas in "that other film" the scientists were goofballs or sluts. The best part of this remake though is Marc fucking Singer as he really seems like a space mercenary unlike that toad of a guy from "that other film."

Other than those aspects "Dead Space" fails miserably on all other accounts making this a worse picture than "that other film." First of all the directing is boring. Director Allan Holzman had a little more pizzazz and gave "Forbidden World" a cool 80's new wave look. Fred Gallo gives "Dead Space" a unflattering "direct-to-video" look. The special effects are much worse and less creative than its counterpart and our creature is reduced to a badly made stiff puppet by the end. Third is the sets and like the special effects, they are boring and cheap looking unlike the inspired sets of "that other film" (which were of course leftovers from "Galaxy of Terror." The score? What score? "That other film" had a cool retro 80's scoundtrack and I can't even remember the stock score for this picture. Though we get a topless scene, fans of the gratuitous nudity in "that other film" are going to be sorely disappointed.

After all that we have a lame, pointless remake of a trashy enjoyable classic. Marc Singer may be a better choice for a space mercenary but his presence isn't enough for this remake to rise to the occasion. I recommend skipping it unless you're a curious movie lover like me who wanted to see how Roger Corman could fuck up a remake of an older classic of his. Released on DVD in a double feature with "The Terror Within."

Written By Eric Reifschneider
Posted by Cronosmantas at 1:22 PM