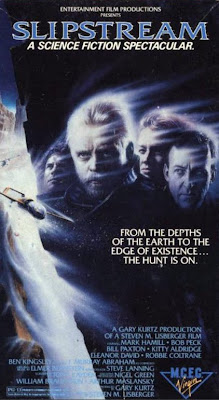 To celebrate the release of "Tron: Legacy" I have decided not to review the original "Tron". I have decided to instead review another science fiction film from the director of "Tron" entitled "Slipstream." Never heard of it? Well it's for good reason as despite the cast consisting of Mark "Star Wars" Hamill and Bill "Aliens" Paxton it was released under the radar and quickly faded into the abyss of video boxes cluttering up video store shelves being forgotten and only popping up now and again in crummy public domain DVD sets.

Well this science fiction mess is like a low rent "Blade Runner". Mark Hamill, sporting a beard, is a bounty hunter in a post apocalyptic world. It seems that Earth was ravaged by natural disasters that re-carved the world with giant canyons in which a fast deadly wind called the "slipstream" blow through. That's what I gathered from the hastily written opening narration anyway. Hamill is on the hunt for an android ("Jurassic Park"s Bob Peck) who is wanted for murder. Hamill and his female partner decide to stop for a bite to eat, with their prisoner no less, at a crummy restaurant. In pops in Bill Paxton playing his typical annoying jackass character who steals the prisoner in order to get the bounty on his head. Now Paxton gets into a little two person plane and cruises the slipstream on the run from Hamill. They fly, fly, and fly some more only momentarily stopping in area's that leads them into predicable trouble.

"Slipstream" is a disjointed mess that's plot has no flow what-so-ever. The plot is complicated yet vague on the facts at the same time. This mixed with tedium (and lots of time showing our characters flying their planes) makes "Slipstream" not a very enjoyable "science fiction spectacular" as the tagline screamed out on the original VHS box cover. Hamill is interesting as the antagonist for once but the dialogue is rather silly and it's hard not to bust a nut laughing at some of the lines these guys have to spout out (example: "Every time a piece of human trash is put under a rock pile the world is a better place"). Also how the hell did they manage to get academy award winning actors F. Murray Abraham and Ben Kingsley to appear in thankless small roles?

It's a shame as the film does have some good camera work, a great score, some adequate special effects, and a good performance from Bob Peck as the android who wants to be human but the messy plot, dull action and bad dialogue makes this a chore to sit through. Apparently producer Gary Kurtz went through some financial struggles during production as his money was cut short when his wife filed for divorce. Due to this "Slipstream" was released theatrically in Europe with no ad campaigns and popped up as a direct-to-video feature here in the States. Direct-to-video hell is what "Slipstream" deserved to get and thanks to the producers financial struggles the film has fallen into the public domain and it rears its ugly head now and again in bargain movie packs. There is a small, a very very small, group of people who like the film and are crying out for widescreen treatment of the film on DVD. Good luck getting that to happen! I only recommend this for "Star Wars" fanatics that want to see how Mark Hamill's career sank into oblivion.