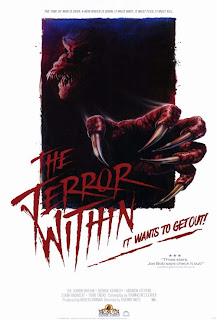 Not content on making two rip-offs of "Alien" in the early 80's with "Galaxy of Terror" and "Forbidden World" with his company New World Pictures, Roger Corman set out to make a third "Alien" rip-off in 1989 with the likes of "The Terror Within" under his new company banner Concorde Pictures. The result was, let's say, not nearly as successful or fun as his earlier trash classics.

In a post-apocalyptic future, a handful of scientists are held up in an underground bunker. When their food supply begins to run out, they are forced onto the surface to look for food and end up coming into contact with creatures they call "gargoyles." Happening onto a women survivor, they foolishly bring her back to the bunker only to find out she is pregnant with a monster. During an abortion process, the beast breaks out and grows at an incredible rate to stalk and kill our scientists. Sound familiar?

The filmmakers changed the setting from space to and underground bunker but audiences aren't that dumb to see that this is a complete "Alien" rip-off from start to finish, no matter what the setting is. Creature that rapes human beings to impregnate them: check. Monster chases through air ducts: check. Strong female lead: check. Monster that's harder than hell to kill: check. Token black mechanic: check. I could go on and on but you've seen these rip-offs a hundred times before already.

The budget is mega low and the film shows it with poor sets, bad lighting and a rubbery looking guy-in-a-suit monster. The monster design isn't terrible (the head is quite good) but director Thierry Notz decides to show the creature too much and in too bright of lighting which accentuates how fake the suit is. Hell even the amazing alien design in "Alien" would look fake in this lighting but that film was made by talented professions who know how to light the monster to make it look amazing unlike these hack second rate filmmakers. The origin of these monsters is also never explained. Are they a mutation due to humans being exposed to the disease that whipped out ninety percent of the population? Are they a natural evolution of man due to the harsher environment they have to live in? A little light on the subject could help!

The saving grace to this picture is actor Andrew Stevens who is a likable actor even in drek like "The Terror Within." He must of liked doing this film enough as he would end up directing the sequel "The Terror Within II" without the financial support of Roger Corman (That sequel is hard to get your hands on but I doubt I will try terribly hard to see it). George Kennedy is the biggest joke here. By this time in his career he was doing bad films only for money and it shows as he gives a dismal performance and even an academy award winner like him can't make some of the bad dialogue stomachable. (worst line: "Gargoyles, schmargoyles!")

"The Terror Within" is an uninspired ultra cheap rip-off that doesn't even have the decency to overly entertain with its shear badness like it's older counterparts "Forbidden World" and "Galaxy of Terror". There are lots more "Alien" rip-offs out there that are a lot more joyful to watch and I suggest hunting down those films first. Also released on DVD in a double feature with "Dead Space."

Written By Eric Reifschneider
Posted by Cronosmantas at 12:14 PM