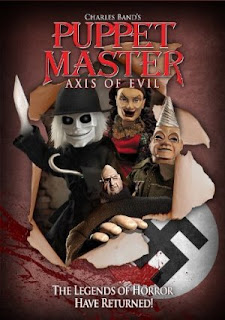 Has the Puppet Master franchise really reached the big number "10"? Despite Full Moon president Charles Band considering it only the ninth entry (more on that in other "Puppet Master" film reviews), it is technically the tenth, count 'em, tenth film in the franchise. It boggles my mind that the franchise has lasted over 20 years and this many entries. It's beat out horror heavy weight franchises like "Halloween" and "Nightmare on Elm Street" (not including remakes) and is on the coattails for beating out "Friday the 13th" and even the dreaded "Witchcraft" series. I will admit that's quite a feat for a franchise considering we are in a time when most films are being remade as opposed to sequelized. For that I give the "Puppet Master" franchise respect. The bad part is that this monumental tenth entry isn't much better than the last four entries and if you've suffered through those films as I have, then you know that's a really dismal statement.

This tenth entry, like many of the last films, decides to take the prequel route... well for the most part. The plot wraps itself around the pre-credits sequence in the original "Puppet Master". If your reading this review then it's safe to assume you've at least seen the original film so you know that our "puppet master" Andre Toulon committed suicide after hiding his puppets in the wall due to Nazi agents knocking on his door. Cue in young crippled male lead that stumbles by the door after Toulon commits suicide. Now the the film becomes a "sequel" to the original's pre-title sequence (confused yet?) as he goes in the room, somehow manages to find his hidden puppet trunk in the wall, and of course predictably opens it, learns the secret to make the puppets move, and then uses them to go after some Nazi spies in China.

I was skeptical when news hit that Charles Band was making another sequel into his "Puppet Master" franchise. I mean the last four entries sucked balls so I was not looking forward to it. I became opened minded once I viewed the trailer to the film as the production values looked better than the last handful of sequels but the trailer wasn't enough to make me plop down hard earned cash to add the film to my collection. Thanks to my brother renting the film and letting me watch it, I am extremely glad I didn't waste money actually purchasing the damn thing!

What's good about this sequel? Not much but the trailer was right, the production values are better than the last few sequels. Just because the values are better doesn't make the production values great. The sets are relatively poor and the movie looks like it was filmed with a low quality digital camera. Another good thing is that the puppets aren't computer generated (like many sequences in the recent "Demonic Toys 2") but without the stop motion magic of David Allan (who died in the late 90's) we are still left with stiff moving rod puppets. It was also clever how the filmmakers incorporated the pre-title sequence from the original film but in doing so they left some glaring plot holes (like the franchise didn't have enough as it is!). If our young cripple found Toulon's puppet trunk and took it to China to fight Nazi spies then how the hell did the villain in the first film find the trunk in the wall of the hotel? Also the film introduces a new puppet in the form of a ninja.... another puppet that appears in a prequel and amazingly doesn't show up later in the "Puppet Master" timeline.

"Puppet Master: Axis of Evil" suffers most from producer Charles Band cutting far too many corners. To save money he shot it in China for pennies. Due to this he hires shit actors and even gives the directing chair again to David DeCoteau. Sure he graced us with the decent third entry in the franchise but he was also responsible for two of the worst ("Curse of the Puppet Master" and "Retro Puppet Master") so he obviously can't be trusted to always deliver. He again fails....not as miserably like the afore mentioned films but damn close.

"Puppet Master: Axis of Evil" is not the return to the glory days that many fans were hoping for. The plot is boring and dull, the acting is dreadful, the sets are poor, and the directing is uninspired. What's sad is it seems that Full Moon really tried hard with this film and they still fell on their face. It's due time to close the lid on this puppet trunk once and for all and retire these puppets to the fire wood pile. Full Moon lost their zest years ago and this failed attempt to recapture that glory further proves they never will.

Bonus Rant: I hated how the title sequence read "Charles Band's Puppet Master: Axis of Evil." David Schmoeller, director of the original "Puppet Master", had a falling out with producer Charles Band and later stated in an interview that Band, unlike B-movie master Roger Corman, always took the credit of the films and never gave any to the directors. This arrogant title sequence further proves Schmoeller's statement.

Written By Eric Reifschneider
Posted by Cronosmantas at 7:56 PM