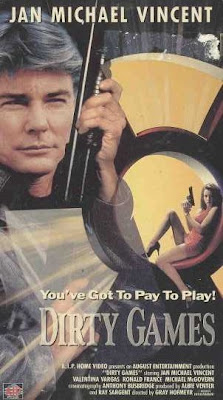 I truly hate Jan-Michael Vincent. I've always found him to be a poor actor and it is known that he is a rather difficult actor to work with. I even have a hard time standing him in my favorite Charles Bronson movie "The Mechanic." With my hatred for him it should come as no surprise that I hated "Dirty Games." Some people may say "well you're judging the film too harshly just for the fact you don't like the lead actor." That may be true but even if you take Vincent out of the equation "Dirty Games" still sucks.

The uninvolving plot has Vincent as a scientist that has created radiation impenetrable containers to store toxic waste out in the middle of desert. With the help of his ex-partner's daughter (who suspects him for aiding his murder), he has to stop a small group of terrorists from blowing up his new toxic waste compound.

The plot makes absolutely no sense. Why would terrorists want to blow up a toxic waste storage facility that is located out in the middle of fucking nowhere? It's not like it will kill a large number of innocent bystanders. The rest of the time we are left with Vincent giving the camera quizzical looks as he tries to locate the terrorists and win back the love of his ex-partner's daughter.

Typical with Vincent his performance is despicable. It might just be me but every film I see him in it seems like he doesn't give two shits about the film and is only doing the bare minimum to quietly collect his unearned paycheck once filming wraps. The scenes where he and his love interest share screen time are especially nauseating with their dry, embarrassingly bad acting and dialogue. Everyone else in the cast seems equally unenthused and sleepiness will soon take over the viewer.

The pace is complete shit and I found myself dozing off numerous times during the run time of the film. I actually had to finish the films in three sittings as I lost interest and by the time the credits rolled I had already completely forgotten this film even existed. Even writing this review I am struggling to remember anything remotely worthwhile in the movie. I truly can't dig anything out of my memory remotely good about this quote, unquote "action film" that lacks action and suspense.

I happened upon this film in a quadruple feature with three other completely unrelated action films and this was by far the weakest film in the collection and I thank God I didn't actually waste money on purchasing this film by itself. Then again I never would have due to its lead actor and therefore would have never have wasted my precious time watching such unmemorable crap. Can anyone give me back the money that I wasted on electricity to watch this cinema diarrhea?

Written By Eric Reifschneider
Posted by Cronosmantas at 7:15 PM