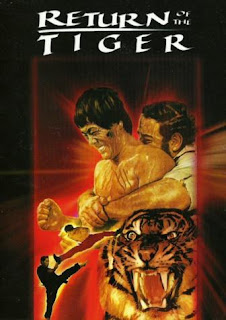 It's been a while since I've viewed and reviewed a Bruceploitation film and what a better way to jump back into this wonderful subgenre than to watch "Return of the Tiger", Bruce Li's sequel to my personal favorite Bruceploitation 'classic' "Exit the Dragon, Enter the Tiger." Is it a true sequel? Well not really as Li plays a different character but it was advertised as a follow-up to that shameless martial arts magnum opus and most likely took its title by combining "Exit the Dragon, Enter the Tiger" and the Bruce Lee classic "Return of the Dragon." Despite not being a 'true' sequel, it was great to see 'Tiger' return in another enjoyable Buceploitation fest.

Rather than playing Bruce Lee's successor as he did in "Exit", this time he plays a secret agent that goes undercover with his female partner to take down two heroin drug rings by pulling a "Yojimbo" and playing each side against each other. Lots of and lots of mindless fight sequences ensue.

Bruce Li, my personal favorite of the Lee clones, is likable as ever but the unforeseen addition of brutish actor Paul Smith very well might be the best part. This 'Bud Spencer' of the rest of world cinema is mostly known for playing a sadistic prison guard in "Midnight Express" and Bluto in Robin Williams' "Popeye" and his appearance in a Bruceploitation film is enough to make anyone scratch their head. However he landed in this film I'm sure glad he did because he is a menacing looking bastard and surprisingly he able to hold his own in fight sequences with our clone.

Like "Exit the Dragon", I love the 'modern' urban 70's setting as opposed to a period setting and the filmmakers again utilize great locations for their fights such as abandoned factories. There was even an awkward fight sequence which included goons on motorcycles corralling in Li in a junkyard.

Typical with Bruceploitation films, some of the fight sequences go on for far too long, even fights that Li is absent and don't even add anything to the plot, then again what am I talking about? No one watches Bruceploitation films for plot! It's for fighting and trashy entertainment and "Return of the Tiger" delivers on that aspect. Our fighters even defy the laws of physics in very awkward moments, like jumping off invisible objects in thin air and doing fly kicks the length of a basketball court.

What's the worst aspect of this movie? No not the dubbing, though it is dreadful. No not the character development even though we get no back-story what-so-ever for our two secret agents, especially the women. No not the music which is actually good, no doubt because some of it is STOLEN from the James Bond movie "Live and Let Die" (what is with Bruceploitation films stealing James Bond scores?). Is it the DVD? You guessed it! Another bad transfer, surprise, surprise. The DVD I have is from Trinity Entertainment and like their release of "Exit the Dragon", they completely botched the picture ratio. When in full screen mode it's squished and in 16x9 mode everything is stretched. GOD DAMNIT! It was extremely annoying to watch the film this way and I had to beg my friend Bill to fix the picture ratio like he did for me for "Exit the Dragon."

Picture ratio problems aside I found this to be another entertaining trashy Bruceploitation film and it was refreshing to see Li play a role that wasn't Bruce Lee or his successor. I didn't quite like it as much as "Exit the Dragon, Enter the Tiger" but for fans of these trashy martial arts films "Return of the Tiger" is a must watch.

Written By Eric Reifschneider
Posted by Cronosmantas at 12:42 PM