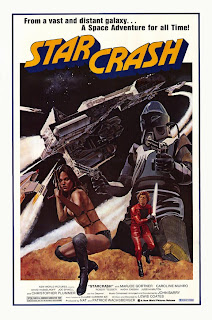 Since my brother is reviewing the greatest saga of all time (no not "Lord of the Rings", "Star Wars" you douche!), I decided to contribute a review for the greatest "Star Wars" rip-off of all time.... drum roll please... "STARCRASH"! Who's the best (or would that be the worst) at making rip-offs? The Italians of course! And who's the best at distributing rip-offs? None other than Roger Corman! An Italian film and Roger Corman, it's a match made in hell... as in hell of a good time!

"StarCrash" has a typical "Star Wars" rip-off plot with the evil Count Zarth Arn (Joe Spinell of "Maniac") destroying a galaxy ship with 'red globules' (don't ask) and kidnapping the Emperor's son (David Hasselhoff, the horror, the horror!). Jump to the other side of the galaxy and we are introduced to our heroin Stella Star (Caroline Munro, the luscious bikini clad villainess from the Bond film "The Spy Who Loved Me" who had a talent for flying helicopters), her alien sidekick Akton (Marjor Gortnor, known from such stellar films as "The Food of the Gods" and "Mausoleum") are space pirates that pick up an escape pod and are captured after a high speed chase. They are latter released as the pod contained an android from the galaxy ship from the beginning of the film and the Emperor gives them the mission to go rescue his son from the clutches of Count Zarth and stop him before he uses his the deadly "StarCrash" weapon which as the capability to destroy the universe!

Director Luigi Cozzi (under his American pseudonym Lewis Coates) began his career working with Italian great Dario Argento and his directorial debut "The Killer Must Kill Again" was a marvelous little giallo. Gialli however were not his true passion. His passion was science fiction so Luigi decided it was a perfect time to cash in on the genre thanks to a little film, I forget the name, directed by George Lucas. Typical of Italians, he loads this space opera up with nothing but "influences" from "Star Wars", "Flash Gordon" and even "Jason and the Argonauts". "Jason and the Argonauts"? Yes there is a giant metal statue that chases our heroes just like the Bronze statue in the afore mentioned film and there is even a robot sword fight that is eerily similar to the fantastic stop-motion skeleton battle at that film's climax.

The cast for this film is just wonderful! We even get the great Christopher Plummer collecting an easy paycheck for appearing in the small role of the Emperor. The rest of the cast is B-movie vets and actress Caroline Munroe is a dish to look at. Did I mention she runs around half of the film in a space bikini? Ooo-la-la. When the dialogue gets too stupid to handle, her beautiful body is enough to keep you interested. She's not the only connection to the James Bond franchise... the score is provided by James Bond regular John Barry. How the hell did they get such a high profile composer to work on such trash? However they enticed him (cha-ching!) I'm glad they did because it's a fantastic score adding to the sheer fun of the trashy film playing in front of my eyes.

Thanks to being a low budget Italian rip-off, the special effects are the worst aspect to the film. Though they look shoddy (some not even looking better than effects from films made fifteen prior) they still have a silly charm to them. The dialogue is painfully awful in many parts but fans of this type of cinema should be used to poor and badly dubbed dialogue by now.

"StarCrash" is a BAD "Star Wars" rip-off but it's an entertaining bad "Star Wars" rip-off. I had a ball! The B-movie lover in my blood lapped this film up hungrily. Despite its trashy nature and low budget, "StarCrash" was a mini success here in the United States thanks to Roger Corman's company New World Pictures picking the film up to release stateside. Apparently Corman wanted to test the waters to see if there would be a market for low budget 'space operas' before he started production on his own "Star Wars" rip-off "Battle Beyond the Stars". There was and a small legion of fans would become known as "Crashers". Luigi did write a sequel that was supposed to be produced by "legendary" Cannon Films. What?! My favorite production company was going to produce a sequel to "StarCrash"? Sadly it never happened as producer team Golan-Globus rewrote Luigi's script to his dismay and he later ended up directing the craptacular 1983 version of "Hercules" for them instead. I say if you like cheesy science fiction, preferably mixed with trashy Italian style, then give "StarCrash" a shot. Hell it's better then most of those dreaded "Star Wars" prequels...