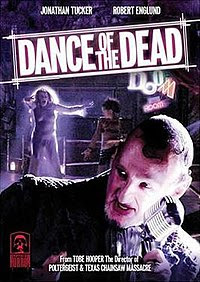 Director: Tobe Hooper (famous for "The Texas Chainsaw Massacre" (1974), "Poltergeist", and many more)

In a post apocalyptic future, a young woman desperately searches for her own salvation underneath memories of a war torn childhood and an oppressive mother. When a group of young punks come into their diner, she finds an odd connection with one of the young men. This leads her to go out into the city with them to a happenin' club. This club, lead by a very deranged man (Englund), has a stage show of corpses injected with a war chemical that makes them gyrate and reanimate. What she finds at the club though is more disturbing then she thought and uncovers secrets about her past that will forever change her future.

This is the first episode of "Masters Of Horror" that deviates from the status quo. Not true straight up horror, "Dance Of The Dead" comes off as more of a science fiction/fantasy with influences from classic films like "A Clockwork Orange" and "Blade Runner". It also never really feels like a full story. It's rather basic in its plot, with the twist coming out of left field a bit and wrapping up very quickly, and the majority of the time is spent on creating a setting of distopian feeling and panic. The acting is decent and the direction is done in a very modern Post-Punk vibe with blurs and shaky camera shots all over the place and these work for the most part, but by the end of the episode, it felt like something was missing. Like there needed to be a bigger meaning to it all, or a larger plot arc. That just undermines the entire episode too, making it feel rather empty. The execution is all there, but the odd foundational work needed more fleshing out. Good, but not near the quality of the previous entries.