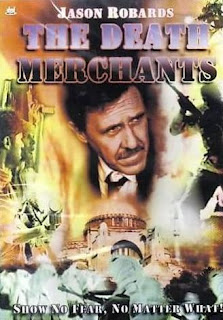 Since this film was packaged on the same disc of the dull espionage blah-fest "Embassy" I went into "The Death Merchants" with a similar mindset that this was going to be, oh let's be kind, a well below average picture. It was a better film than "Embassy" but not enough to warrant any extra stars in my rating. It's still dull, it's still overly talky, and most of all the plot can be a bitch to follow.

"The Death Merchants" is obviously not the original title for this forgotten espionage want-to-be thriller as the font for the title is completely different from the rest of the credits showing it was changed at a later date. The film is actually a 1973 West German film that got released in the United States in 1976 as "The Spy Who Never Was" then changed to "The Death Merchants" in many areas. The original title actually fits the film perfectly but leave it to big-headed distributors to change it to something as misleading as "The Death Merchants" in order to garner more tickets by fooling into the public this was going to be a violent action orientated film.

The plot follows Doctor Hersfeld (Hardy Krüger), an everyday German citizen who unwittingly reads a message at an airport that was originally intended for a double agent. Now he is on the run from middle eastern terrorists who believe him to be the agent. In order to clear his name from the identity mistake, he eventually finds help from an intelligence agent (Jason Robards) and finds time to fall in love with one of the terrorists tailing him.

This plot is not easy to follow and American distributors must have thought the same as they hastily added in a jarring, poorly written narrative into the beginning of the film to help the audience understand what the hell is going on. Though the narration is poor, it still helped me figure out the plot otherwise I would have been completely lost. The part that gets me about this film is that this doctor doesn't seem too worried about being misidentified as a double agent. He just walks around like an arrogant ass like he has it all figured out. He seems unwilling to take help from the intelligence agent and he even treats the terrorist he has fallen for like a dog, slapping her around from time to time. Hell this asshole deserves this headache he gets. I personally found the ending very suiting for this jackass.

The film is shot rather well and it showcases wonderful Europe and Middle Eastern locations. The acting also isn't bad with class act Jason Robards being the one actor that shines the most, even if his role is rather thankless.

Overall this is a rather drab espionage picture with an overly complex plot that is remarkable dull through most of the picture and some good directing sadly can't get it past the plot obstacles. Like "Embassy", "The Death Merchants" is another espionage thriller from the 70's that will remain forgotten and I doubt anyone will miss it.

Written By Eric Reifschneider
Posted by Cronosmantas at 7:07 PM