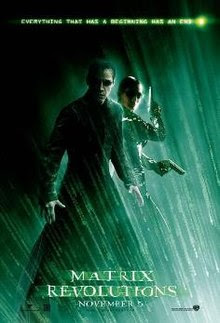 As with "Reloaded", the final part of the rather epic "Matrix" trilogy is still a flawed piece of work despite some very nice attempts at making it the ending that everyone desired. Although still full of great visual work and some very intense action sequences, "Revolutions" just doesn't cut the cloth even as well as its first part did. Coming off as less intense and less smart and too focused on wrapping things up, which it doesn't do as neatly as hoped. It's still a fun watch and partnered with "Reloaded" it sits better than on its own.

Neo (Reeves) is now on a crash course with destiny. The machines are making their final legs towards Zion to kill all of the rebellious humans and even his believers seemed shaken in their faith that he can bring peace. So Neo makes a plan to save Zion by making a deal with the machines against a common enemy, Smith (Weaving) who has become a rampant virus in the Matrix and is knocking at the door for the machines in the real world. Now Neo has to face his arch nemesis one last time, before the machines utterly annihilate Zion and all of free humanity.

Once again, the biggest issue with "Revolutions" as a film comes from its lack of 'feeling whole'. As the second part of the 2-part film that started with "Reloaded" it tends to lack much of a story and focus mostly on the climax of the film and wrapping it up. Which hurts its overall story telling abilities and makes it feel rather lack luster. It starts off on a kicker and never really lets up and just sort of quickly ends loose endings to get it done. Some of these loose ends seem a little vague (like how exactly is Smith destroyed? I could venture a guess having to do with anti-virus software development but really I don't know shit about that) and too much time is spent on the epic-ness of the action and not enough on finishing off those character arcs.

Which brings up the action sequences. Although still good, they just can't top the sweet ass material we saw in "Reloaded". Yeah the "Mech Warrior" inspired defense of Zion is cool, but it really does look like a video game most of the time and of course the final throw down between Smith and Neo is shot in impressive manners, but it just doesn't quite utilize the choreography like it could have. Nothing quite lives up to what the franchise has established for "Revolutions" and it makes it sort of a let down.

The film also seemingly loses a lot of its smart philosophical tripe. Although it does have it in some of its plot developments and details (like Neo being blinded for example), it never really develops some of the philosophical work that was smashed into viewers from the previous film. It occasionally does tap a few here and there, but rarely does it fulfill the need for those moments that "Reloaded" prepared us for. One more thing that just doesn't make the cut.

The execution is still there, the Wachowski brothers are still ripe with visual work and their writing is still solid and the acting portion is as good as it can get with Reeves in the lead role. (Side note: Seriously, you would think that he would get better with time and experience but this last one might be his worst yet for the franchise.) But the film just fails to get the ending feeling that it needed. It leaves you a little longing in the end for more and it never answers some of the necessary questions.

As a second half to a really long film, it works better than it does on its own but it still doesn't quite live up to what it should have been. "Revolutions" gets the job done with a little flair, but it should have been the topping on a science fiction mountain cake. It just isn't.