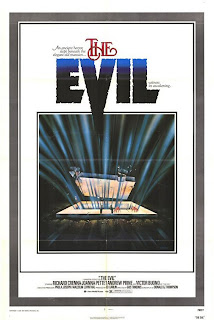 Now this is a haunted house picture! Films like "The Haunting" (the original of course), "The Legend of Hell House", "Poltergeist", "The Changeling" and "The Amityville Horror" (original again) are among the most popular and are all fine films of the "haunted house" subgenre (well not so much "Amityville Horror") but beyond those "The Evil" is the one of the best of the Haunted House films that were released under-the-radar. Even the simplistic title fits this picture as this house is plain and simple evil incarnate.

Psychologist Richard Crenna and his doctor wife decide to purchase a huge abandoned mansion. To get the house prepared they invite a handful of friends. It doesn't take long for the shit to hit the fan as a dog allowed in the house starts going ape-shit barking at a sealed door in the basement floor. Crenna, being the curious house owner, removes an iron Christian cross holding the door shut (Note to self: If a room in the basement is sealed with a cross, there's a damn good reason it's there SO DON"T OPEN IT!) releasing an ancient evil which traps all the inhabitants of the house and playfully kills them one by one. Crenna is a man of science and can't believe a supernatural force has taken over but his wife sure believes and she has to beat the clock using an old diary of the man who built the house in order to destroy the evil once and for-all.

Director Gus Trikonis is able to generate some great atmosphere in the house beginning with the opening credits that are amazingly similar to "The Amityville Horror" which didn't even hit theaters until the next year. Trikonis also is able to craft some eerie and inventive death sequences. My personal favorite is a character running, stops to look up a dark stairway and start screaming. Another character comes bursting into the room and from a distance sees the women dragged up the stairway into the ill-lighted story above. It's an eerie scene made even more uncanny as we never know her outcome, but it is very obvious that she came to a horrible demise. Apparently in the original script it was supposed to be a little demonic creature that drags her up but due to budget restraints the monster was never filmed and the scene is more creepy with out it. This just proves that some of the best deaths are left to our morbid imaginations. This doesn't mean there isn't some violent deaths on camera as there is a burning, an electrocution and even a circular saw through the hand but for the most part this is a rather bloodless film. Sorry gore hounds! "The Evil" is some-what old fashioned in this sense as Trikonis goes for the "less is more" approach to the killings and blood, a concept that works.

He does, however to the films detriment, decide to show the transparent ghost of the former owner which just comes across as a little hokey. The cheese factor of this special effect could have easily been done away with. This however is not the biggest sin the film commits. That comes towards the end when Crenna and his wife come face-to-face with "the evil" that occupies the secret compartment in the cellar. This claptrap plot addition almost derailed this train into oblivion, causing the house to almost collapse on its own foundation. Showing what "the evil" was, without giving it away, was completely idiotic and would have been laugh educing if I didn't like the rest of the film so much. To be honest, that sequence royally pissed me off and almost ruined the entire picture for me. Apparently I wasn't the only person this "revealing sequence" pissed off as the distributors of the film (Roger Corman's New World Pictures) actually had the sequence removed from many of the prints due to audiences unintentionally laughing at its silliness. To be honest I don't remember this sequence when I originally rented it on VHS many years ago. It very well might have been there but I must have been so traumatized that the filmmakers would stoop to that drivel that I put it out of my mind. This asinine sequence is restored on the wonderful DVD release from Shout! Factory.

"The Evil" is a good haunted house thriller with a solid cast, a tense atmosphere and some eerie deaths. I would have easily given the film three and a half stars but thanks to the botched revealing on what "the evil" was I had to deduct the film a half a star. If you're a horror film fan, especially of 70's material, then "The Evil" is well worth a purchase. Shout! Factor was nice enough to release this lost gem on DVD in a double feature with "Twice Evil", a not so hot haunted house flick.

Written By Eric Reifschneider
Posted by Cronosmantas at 6:27 PM