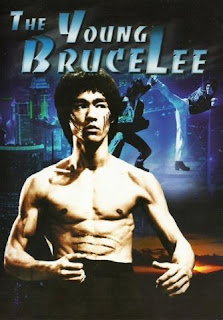 Another year, another poorly made Bruceploitation biopic. How many of these biopics did they make for Christ sake? As you can tell from my rating this is another dud but thankfully the spirit of Bruce Lee blessed us with a slightly less crappy biopic than the last turd I had to suffer through that went under the name "Bruce Lee: A Dragon Story."

Unlike the other biopics I have seen this one begins with Bruce Lee (again portrayed by Bruce Li) as a small child and how he gets his ass kicked while trying to stick up for a girl so he becomes interested in martial arts. He grows into a martial arts master and the rest of the film meanders around with him getting into fights every so often to protect the woman he loves and while at the same time giving helpful advice to bring up the spirits of his best friend.

This film is completely inaccurate but then again we should not expect this to be true to history. If you want accuracy then go watch the big budget Hollywood film "Dragon: The Bruce Lee Story". If you want the Bruceploitation trash version of his life then you are at the right place.

The filmmaking is again very poor with sloppy zooms, bad acting, and a lumbering pace with emphasis on boring training sequences. I will admit I did lose interest a couple of times but like a true cult film fan I powered though it till the end, an ending that hastily ties up the events by showing actual footage of Bruce Lee's funeral in bad taste

Unless you live and breathe these Bruceploitation biopics then I say skip it. There are much more fun and interesting films this subgenre has to offer but sadly these cruddy biopics seem to be the most common and easy to find on DVD. Thankfully this is the last biopic I own so I can march on to review the last 5 Bruceploitation films in my collection that are thankfully original stories and not this biopic crap! At least the Full Screen transfer on my DVD was properly framed, which is a plus compared to a number of shoddy DVD releases in the genre I've seen thus far. Oh and the DVD cover again portrays a still image of the actual Bruce Lee from "Enter the Dragon" and not an image of actor Bruce Li, so don't get fooled into this actually being a true Bruce Lee film.

Written By Eric Reifschneider
Posted by Cronosmantas at 11:59 PM